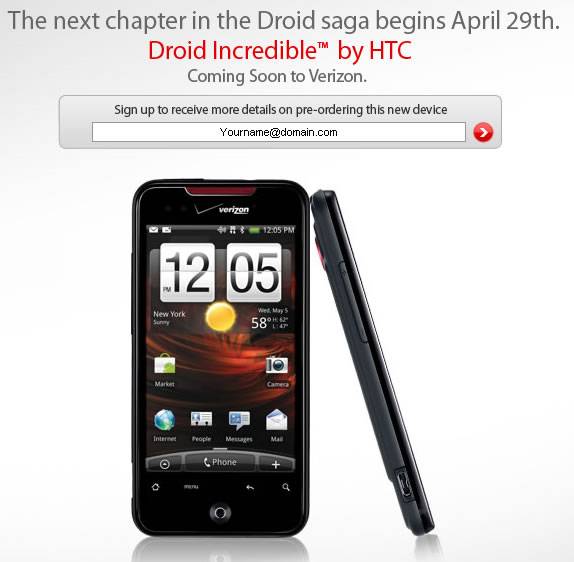 Well, there you have it, folks. Just as we reeled over an April 29th launch date, some screen shots of Best Buy inventory, and the official specification sheet, we now have official word from Verizon Wireless themselves that the Droid Incredible by HTC is now officially real. And, yes, it’s launching on April 29th. And, yes, it’s all the goodness we thought it was going to be.

As you’ve heard plenty of times before, the Droid Incredible by HTC features a 3.7-inch WVGA AMOLED capacitive touchscreen display, Android 2.1, HTC’s Sense User Inteface, a 1GHz Snapdragon processor, 8GB of on board storage, and an 8MP camera on the back for those pictures you’ll definitely want to take.

It also rocks an optical trackpad, the fan favorite of HTC as of late. The preorders will begin on April 19th, and it will indeed be in Verizon Wireless stores starting April 29th. The pricing starts at $199.99 after a $100 mail-in rebate, if you sign up for a new two-year agreement. You’ll also need to sign up for a data package, which they think you should sign up for $39.99 unlimited data and email. So, who’s going to start lining up? Full press release just below.

IT’S A DROID, IT’S INCREDIBLE, IT’S ON THE NATION’S LARGEST AND MOST RELIABLE 3G NETWORK

Price and availability:
DROID Incredible will be available for pre-order online at www.verizonwireless.com beginning on April 19 and it will be in Verizon Wireless Communications Stores on April 29. Pricing will be $199.99 after a $100 mail-in rebate with a new two-year customer agreement. Customers will receive the rebate in the form of a debit card; upon receipt, customers may use the card as cash anywhere debit cards are accepted.
DROID Incredible customers will need to subscribe to a Verizon Wireless Nationwide Talk and an Email and Web for Smartphone plan. Nationwide Talk plans begin at $39.99 monthly access. Email and Web for Smartphone plans start at $29.99 for unlimited monthly access.
For additional information on Verizon Wireless products and services, visit a Verizon Wireless Communications Store, call 1-800-2 JOIN IN or go to www.verizonwireless.com.

(EDITOR’S NOTE: Media can access high-resolution images of DROID Incredible by HTC in the Verizon Wireless Multimedia Library at www.verizonwireless.com/multimedia.)

About HTC
HTC Corporation (HTC) is one of the fastest growing companies in the mobile phone industry. By putting people at the center of everything it does, HTC creates innovative smartphones that better serve the lives and needs of individuals. The company is listed on the Taiwan Stock Exchange under ticker 2498. For more information about HTC, please visit www.htc.com.