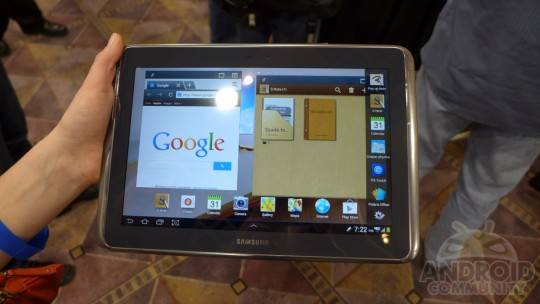 Verizon Wireless announced the Samsung Galaxy Note 10.1 LTE back in January during CES. At that time the release details and pricing were left a mystery and it was simply said that the tablet would be arriving in the coming weeks. Well, it looks like those coming weeks will be arriving very shortly. Simply put, Verizon has said the Galaxy Note 10.1 LTE will be available on March 7.

In addition to offering an availability date, Verizon Wireless also announced the pricing. Those planning to make a purchase will be able to find the tablet online and in retail stores. The Galaxy Note 10.1 LTE will set you back $599.99 and the connectivity will come by way of the Share Everything plans. Users will be able to add the tablet to an existing account for an additional $10 per month.

As for features, there was nothing surprising. That is to say the tablet will arrive with a 10.1-inch (1280 x 800) display, LTE connectivity, S Pen and Android 4.1 Jelly Bean. The tablet also has software goodies to include the multi-view feature. Verizon touts this as being good for students in that they can read an article or watch a video while taking notes at the same time. Of course, more realistically is that many will likely be watching something entertaining while trying to get some work done.

Regardless of how you choose to use the multi-view feature, the tablet also ships with other goodies to include Adobe Photoshop Touch and the Smart Remote app which is powered by Peel. Those looking for a bit more on the tablet may also want to check out the above video. In the video you will see Samsung product manager Ryan Biden as he shows some of the new features and also does a quick hardware tour.