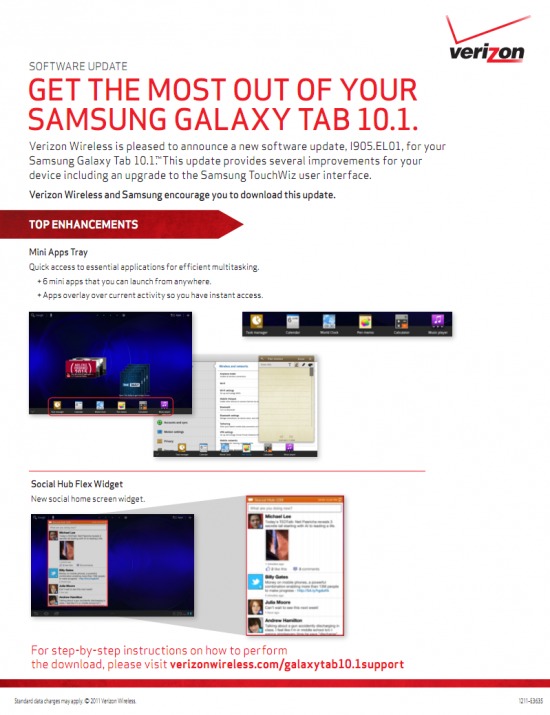 Verizon’s Samsung Galaxy Tab 10.1 should see an OTA (Over-The-Air) update very soon and will mainly consist of UI changes to their increasingly popular TouchWiz UI, and of course a batch of security patches. Many of the widgets have been updated too, so your Galaxy Tab 10.1 will certainly look fresh after the update. For those of you that currently use a home replacement launcher – you may not notice any change at all.

Aside from the UI upgrades, a nice fix has been incorporated to help an irritating bug that caused email to remain bold even after the user read it. Also added was Bluetooth 3.0 support, DivX media files can be played, and additional WiFi routers are now compatible. Business users will also benefit from this update, as it incorporates built-in support for VPN clients. 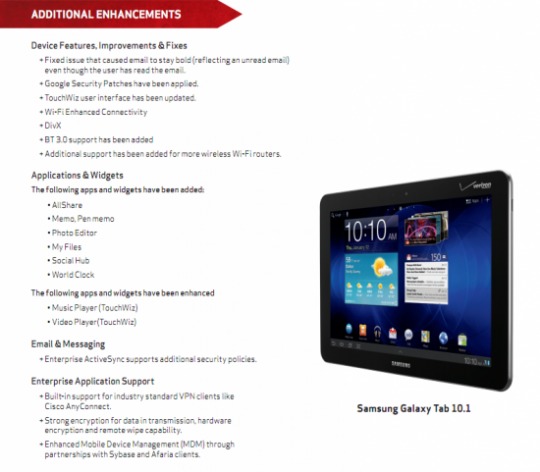 This recently appeared on Verizon’s Support tab, and only lets us know that it is “Coming Soon”. So those of you that want this update ASAP can try forcing a system update throughout the day(s) until it finally arrives. To do this simply navigate to Settings >About Tablet > System Updates. Also, be sure to let us know how you like it! I hadn’t been a big fan of Samsung’s original TouchWiz interface, but it has certainly started to grow on me after each update.