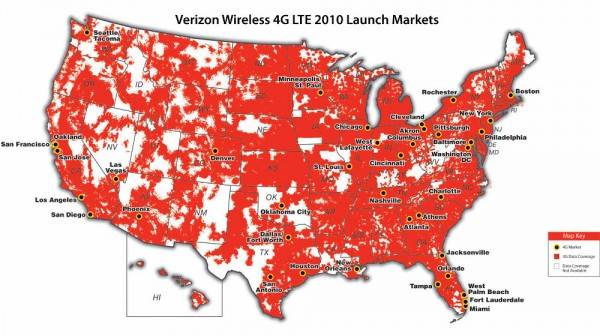 We all know that Verizon is planning to aggressively enter the 4G market with extensive market rollout over 2011, however, we just didn’t know how aggressive they would be – until now. By the end of 2011 they are planning to be launched in at least 140 markets and expect to cover 2/3 of the US by the end of 2013.

That’s a very extensive rollout, their end goal is to offer up 4G service everywhere that 3G is currently available as it’s expected to replace 3G as the standard in the coming years.

Here is the list of initial cities that will be boasting Verizon 4G in 2011:

That’s a total of 49 initial pushes into the 4G market for 2011, combine that with their already active 4G network and we see Verizon keeping its spot as the nations top carrier. Hello, DROID BIONIC and HTC ThunderBolt speeds!