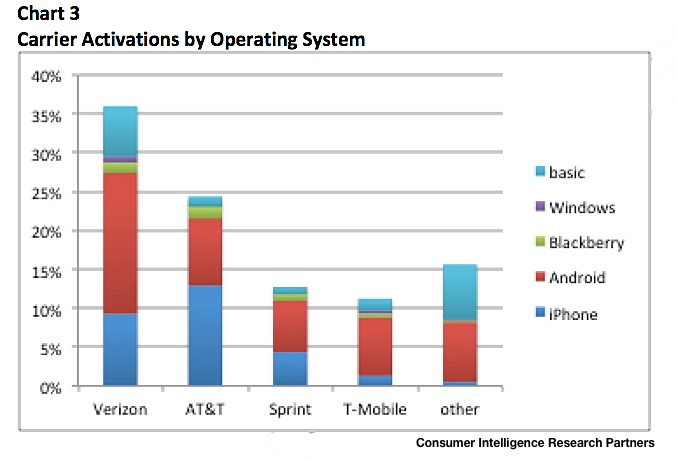 If there’s one thing about Verizon, they love touting their huge 4G LTE network, as well as the Android phones that go with it. It isn’t too surprising then that between June and August of this year, Android devices accounted for around half of all device activations on Verizon. That’s a lot of Android phones.

Consumer Intelligence Research Partners (CIRP) surveyed people who activated smartphones between June and August 2012 to determine what mobile operating system garnered the most activations. They found that not only does Verizon see more overall activations than the other carriers, but Big Red sees more Android activations than any other carrier, period.

Furthermore, Verizon sells roughly 70 percent of its phones through its retail stores, which is more than any other carrier. A quarter of all Verizon’s mobile phone activations between June and August occurred at their own brick-and-mortar stores, and 91% of them came from existing customers. It seems Verizon has seen a lot of activity lately, and it looks like a lot of people are embracing the carrier’s Share Everything plans more so than what Verizon thought.

In terms of the entire smartphone market, Android leads the way owning 48% of all smartphone activations from June to August. iOS comes in second at 29%, features phones come next at 17%, BlackBerry with 4%, and Windows Phone devices with just 1%.