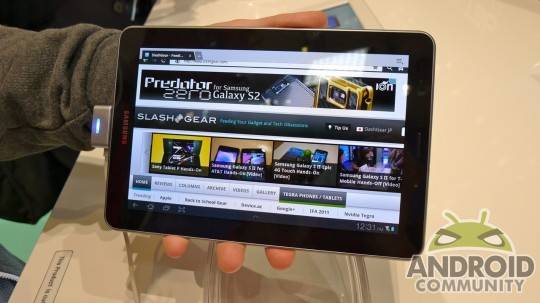 The Galaxy Tab 7.7 is one of Samsung’s most hotly-anticipated tablets – or at least it was, back in August before both CES and Mobile World World Congress. Speaking of CES, it was there that Samsung announced its intention to bring an LTE version of the tablet to Verizon, and according to a listing in the carrier’s equipment guide, it’s due to hit retailers on March 1st – in just three days. The cost? An eye-watering $499.99 on contract, or $699.99 without a commitment.  Rumors that it comes with a free e-book entitled “How to Completely Botch a Product Launch” are unconfirmed.

Make no mistake: the Galaxy Tab 7.7 demands a premium over other 7-inch models, thanks to a downright beautiful Super AMOLED display running at 1280×800. The rest of the specs ain’t bad either: a 1.4Ghz dual-core processor, 16GB of internal storage, and Honeycomb (last time we checked) running Samsung’s TouchWiz interface. Adding Verizon’s solid LTE network on top of it only sweetens the deal. But it doesn’t do so to the tune of five hundred dollars, plus a contract that ropes you into data charges for (another) two years. For comparison, the Motorola DROID XYBOARD 10.1 starts at $529, the 8.2-inch version is $429.99, and the iPad 2 – which you can buy at the standard price without a contract – is $629.

Android tablets are doing better, but not so much better that people will be willing to shell out five hundred dollars for something that (rightly or wrongly) compares to devices like the Nook Tablet and the Kindle Fire. The really frustrating thing is that the carriers are in the habit of insisting upon an exclusive for a few months, which means  that by the time the Galaxy Tab 7.7 hits American retail shelves in a WiFi-only version (if it ever does) Samsung may well be showing off its successor. Sigh.