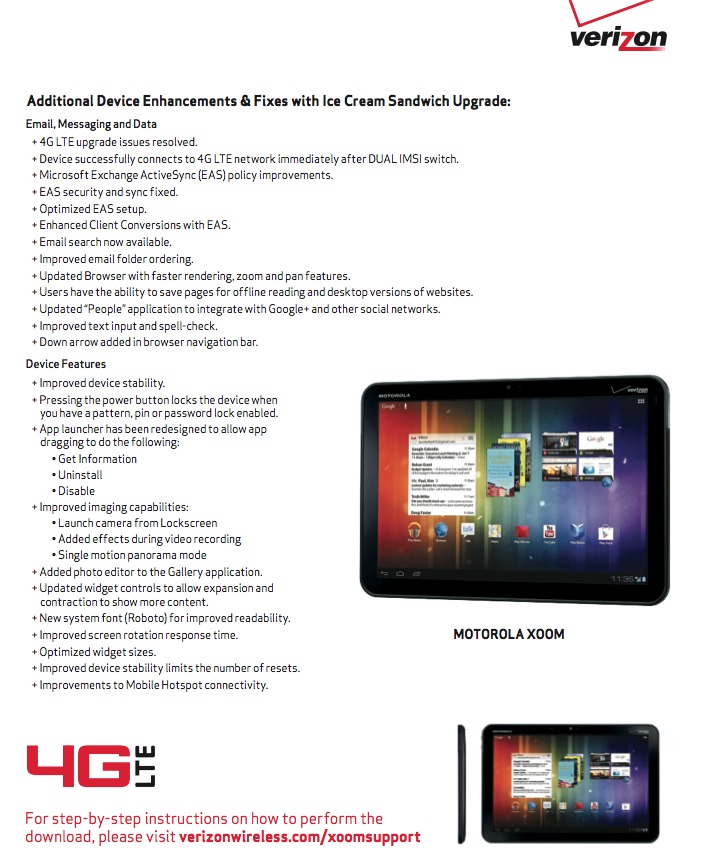 If you’re one of the 12 lucky folks that still own the original Motorola Xoom on Verizon we have good news. After the WiFi model received the update to Android 4.0 Ice Cream Sandwich what seems like forever ago, the Verizon 4G LTE version is finally set to receive the much anticipated update. While it isn’t quite rolling out today, we expect to see it arrive for devices within the next 24-48 hours.

Verizon has just confirmed the update and all the details on their official support page. The update is listed by Verizon as “coming soon” but usually once the info hits their support page the update is a day or so behind. The update to Android 4.0.4 Ice Cream Sandwich is about 107 MB in size and might take a few minutes to download, then you’ll be enjoying those 4G LTE speeds and ICS on that bulky — yet classic Motorola Xoom.

Along with everything we already know and enjoy about ICS, Verizon mentioned the new launch bar, the data usage center (for that 4G LTE), notifications, and creating folders. The Xoom is being updated to the absolute latest Android 4.0.4 IMM76K build so Xoom users shouldn’t have anything to complain about, for now. With this taking two months longer than the WiFi model hopefully all the bugs have been ironed out. We know there’s still tons of Xoom fans so let us know in the comment section below how the upgrade goes.

Update: Verizon has confirmed the update will roll out on June 4th.