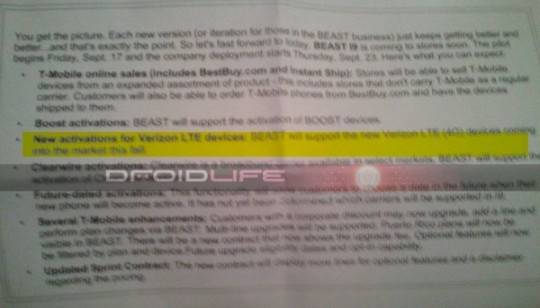 According to internal documentation, it looks like Best Buy is preparing their BEAST internal activation system to accommodate Verizon LTE (4G) phones. Many were expecting Verizon’s 4G would be mainly used for their lineup of USB modems and WiFi devices. However, it seems that actual LTE phones will be coming to utilize the new 4G network that they are already planning to launch in 30 “NFL cities” by years end.

Now we know that it will not be a Windows Phone 7 device because they are not coming to Verizon this year. This means we can safely assume it’s going to be an Android device. Of course, no specific devices are mentioned in this documentation but it’s a start as this is the first we have heard of any expected “devices” at all.