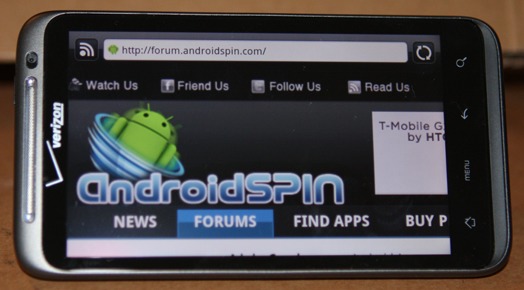 Verizon just can’t seem to keep the HTC Thunderbolt under wraps until its official debut, which we’re expecting tomorrow. The 4G LTE smartphone has shown up in the wild again, this time over at AndroidSPIN, who also took the time to run down the specs. Biggest disappointments? The single-core CPU and absence of HDMI.

The Thunderbolt 4G has a 1GHz processor – which scored 1926 in Quadrant – together with 8GB of internal storage, a 32GB microSD in the box, a 4.3-inch display, Android 2.2 and HTC Sense. There’s also HTC Maps and Navigation, DLNA support and – they believe – an 8-megapixel rear camera and 1.3-megapixel front camera. Their source criticized the battery life, however, which we guess is a side-effect of accessing 4G speeds.