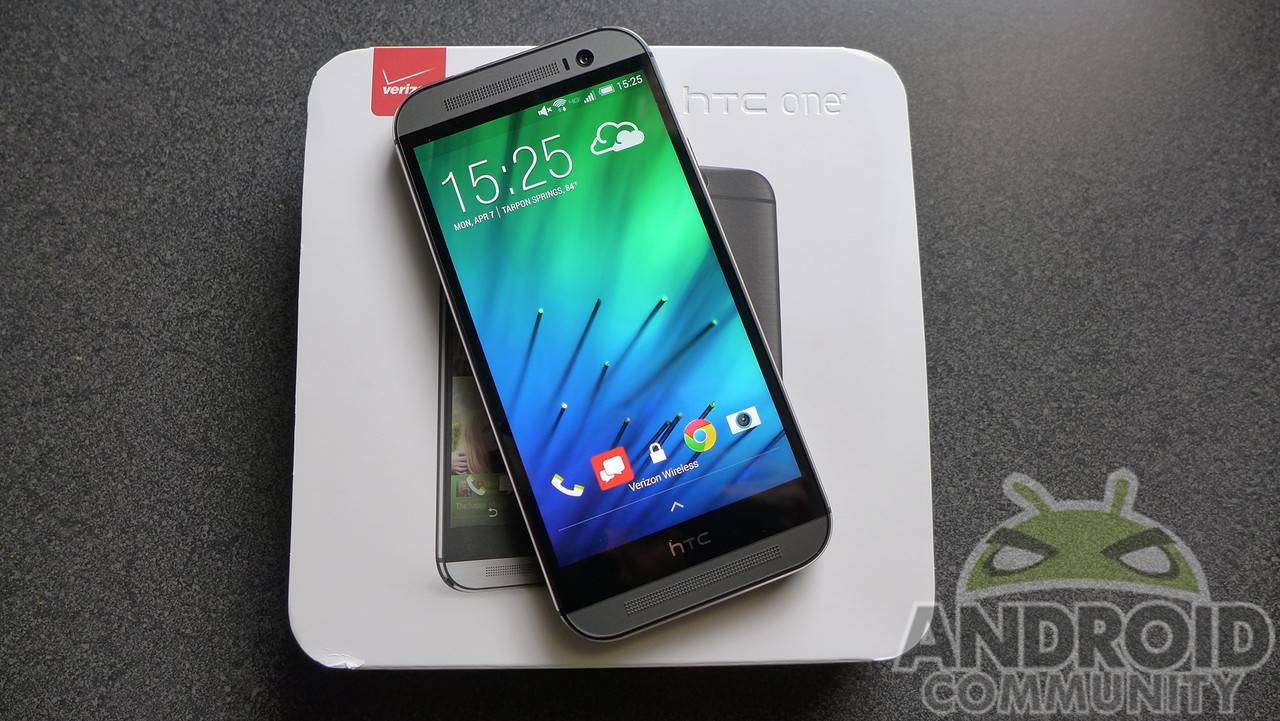 We now have a Verizon HTC One (M8) in for review. The handset arrived earlier this morning, and while we obviously aren’t going to post a full review after having the phone for only a few hours — we did want to share some images and some first impression thoughts. Of course, we can also touch on some of the Verizon specifics that you’ll find (should you decide to purchase this model). That said, read on for our first impressions of the Verizon HTC One (M8).

The HTC One (M7) had a premium look and feel and the One (M8) follows in that same pattern. The handset is solid and sturdy and sports a good looking brushed metal exterior. The Verizon model does have the Verizon and 4G LTE logos on the back (centered towards the bottom), but given the color of the phone and logo — it isn’t overbearing. In fact, the HTC logo sitting centered on the back is much more noticeable. 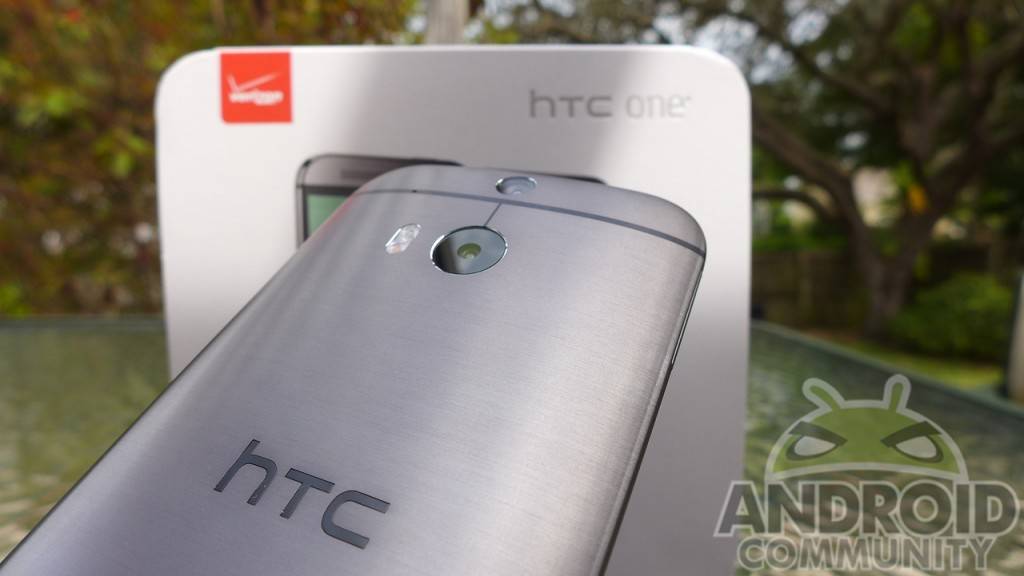 Otherwise, the back has the dual-camera setup with flash. Flipping over to the front and you will find the front-facing camera and an HTC logo towards the bottom. The front also has those BoomSound speakers with one speaker above and the other below the display. Having just streamed a bit of music and a little bit of a video and we are anxious to keep listening.

Continuing with the tour of the exterior — the microUSB and headphone jack are on the bottom, the power button is on the top, the SIM card slot is on the left and the volume rocker and microSD card slot are on the right.

One minor annoyance comes in with the memory card slot, which requires a small pin to open. Unlike other handsets that allow for easy access to the memory card, the HTC One (M8) requires the same tool more often used to open the SIM card slot. Some may feel otherwise but for us this is just a small annoyance, because honestly, we rarely swap memory cards.

The galleries sitting above and below offer a quick tour of the Verizon HTC One (M8). If you notice from both, the handset sports a nice curved design. The curve seems to fit nicely in the hand and it also makes the phone just a bit easier to pick up off a table. A small perk, but still, one we immediately noticed. We also feel the HTC One (M8) feels just a bit nicer as compared to the One (M7).

HTC has the One (M8) loaded up with Android 4.4.2 Kit Kat and HTC Sense 6.0. We’ve been talking about the perks of Kit Kat for a while now so there wasn’t much surprise on that front. And we still have to spend a bit more time with Sense 6 before we begin offering final opinions, but we are liking what we have seen in these first few hours. The images sitting below offer a look at the default lockscreen and home screen setups. Of course, just like other Android handsets –those are easy enough to change and customize. 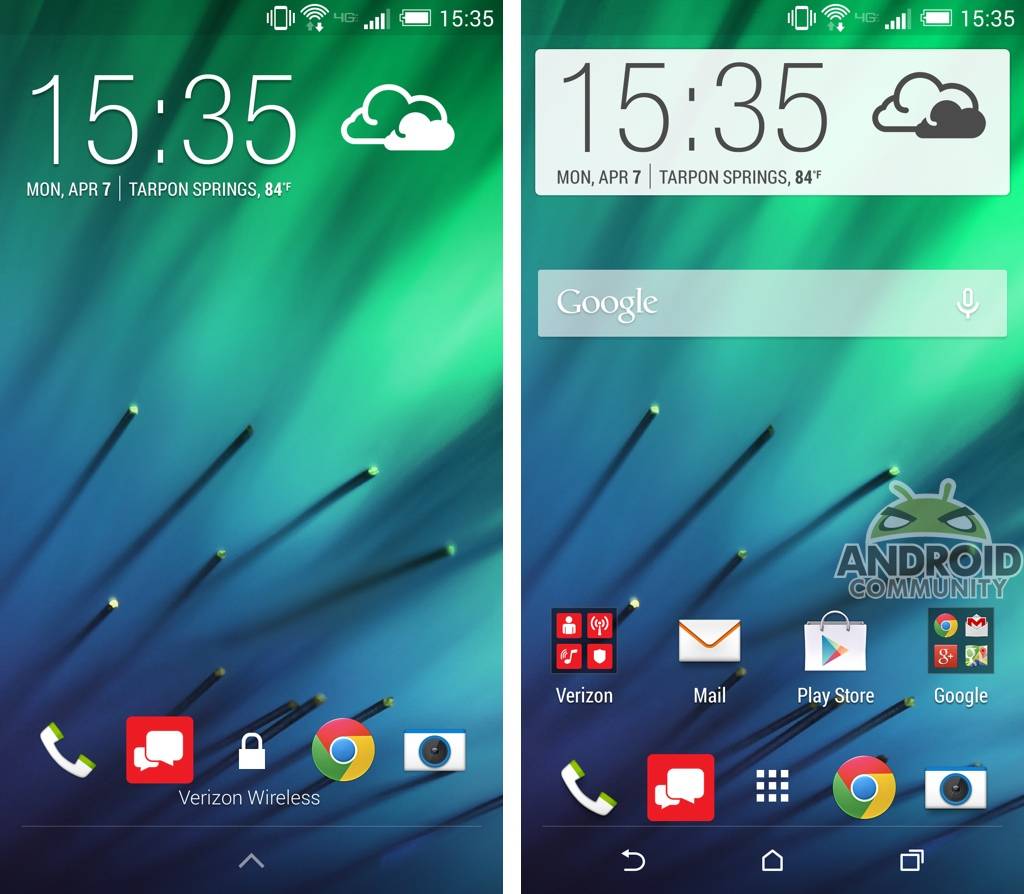 The other point worth mentioning is the bit specific to this model of the One (M8) — the installed apps. The gallery sitting below offers a look at what can be expected. And to clarify, those screenshots were taken before we added or changed anything. Verizon has this broken down as a “custom” option. More to the point, they placed individual folders for Amazon, Google, Tools and Verizon apps.

We aren’t all that bothered by the apps that are pre-installed by the carrier. On top of that, they take up little space and are somewhat of a nice trade-off as compared to buying a Google Play edition or Developer Edition. The trade-off comes in with pricing. We often complain about two-year agreements, but we also find many buying new phones based on price. To that point, carrier subsidies often win out. In this case it is at least nice to be able to put apps you don’t want to use/see in folders to hide them a bit. 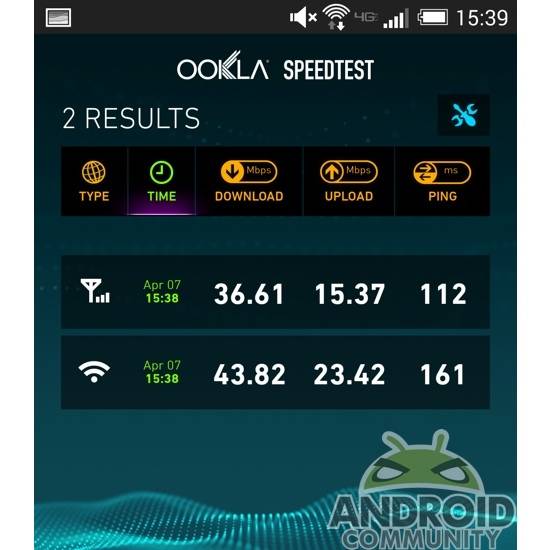 The last point we want to mention is one that will vary from market to market. We are talking network speed here. We were happy to see speeds of 36 down and 15 up in the middle of the day. Then we ran the same speed test using our “up to” 75/35Mbps FiOS connection and were even happier. As you’ll notice, the Verizon 4G LTE speeds were pretty close to what we are seeing direct from our Verizon home router.

Anyway, this is just a quick first look at the Verizon HTC One (M8). Fire away in the comments with any specific questions you may want answered. And otherwise, we urge you to keep an eye on our HTC One tag here to both look back at previous M8 coverage, and also to keep an eye out for future coverage. We plan to offer a full range of HTC One (M8) posts here in the next week or so.