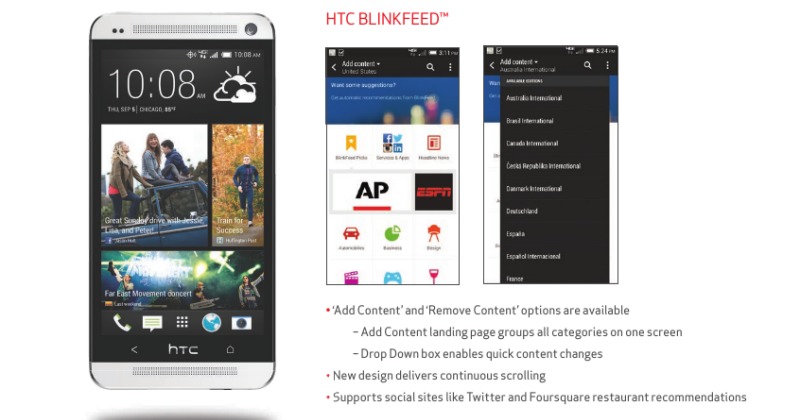 As promised, Verizon is now making available the latest HTC Sense UI version for owners of last year’s HTC One under its care. With Sense 6.0, the HTC One M7 gets a number of update apps and improvements to the user interface to match that of the HTC One M8.

Primary among the changes is the new Blinkfeed, which now lets user add and remove content. Viewing those content has also changed a bit now that it uses continuous vertical scrolling. Blinkfeed has also added support for social networking sites, even including Foursquare restaurant recommendations. The overall user interface has also been freshened up a bit with the use of large swathes of solid colors that has become a KitKat thing. Customizing the homescreen has also been made easier, allowing users to do almost everything right then and there without having to dig through the Settings app.

In terms of non-visual changes, the update also brings in improvements to WiFi connectivity, fixes for several outstanding bugs, update of pre-installed apps like SSO and Audible, as well as the addition of a new baked-in app in the form of Emergency Alerts.

Verizon estimates that downloading the update will take at most 30 minutes, while installing it incurs and additional 10 to 20 minute tops. During the installation of the update, the HTC One will be practically unusable. Should there be an error in installing the update, users are advised to remove and re-insert the battery and power the device back on, at which point they will be prompted to install the update again.