All the details regarding Verizon‘s upcoming plans have reportedly been revealed today in a brand new release date roadmap. A purported document from a Verizon store has been leaked showing the release date for some high-priority devices like the HTC One, and even Motorola’s mysterious Moto X. If you’ve been wondering when they’re coming, we could have all the details below.

The leaked document attained by PhoneArena shares plenty of details regarding Verizon’s plans, aside from just the two flagship smartphones mentioned above. These roadmaps aren’t always 100% accurate, but we’re pretty excited with the details being revealed. Although the dates conflict with previous leaks regarding the DROID ULTRA coming in August too.

If the leaked report is correct, we’ll be seeing the Verizon HTC One finally available come August 1st. Although we’ve seen countless Verizon devices launch later than roadmap predictions. It happens all the time on big red. Then, the Moto X makes an appearance and is slated for an August 23d release date. The next 2-3 weeks should be really exciting as advertising ramps up. 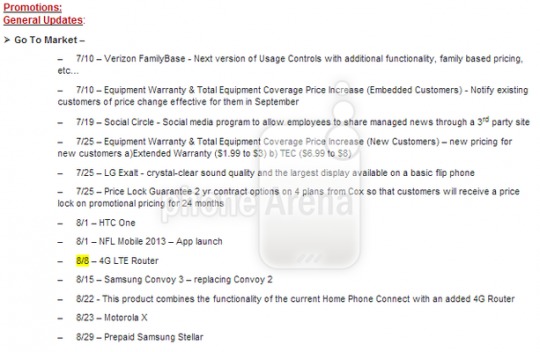 We also see an increase in their monthly warranty protection plans, which is a bummer, as well as a few feature phones. Then the leak also reveals a brand new NFL Mobile 2013 coming August 1st as well, which has me excited for my Super Bowl bound Green Bay Packers.

However, there’s absolutely zero mention of the new DROID ULTRA and DROID MAXX. So either they aren’t coming until September and aren’t even on this map, or Verizon is keeping a tight lid on those handsets.