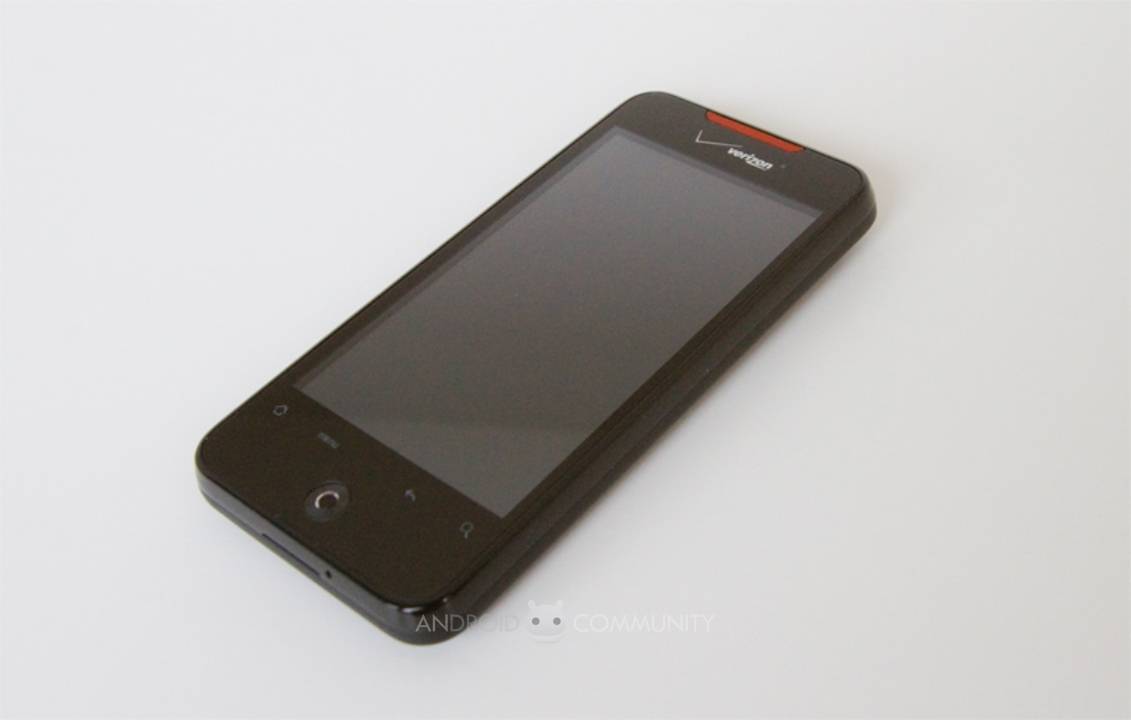 With a name like the Droid Incredible by HTC, Verizon aren’t exactly pulling any punches when it comes to their latest Android smartphone. Beating the CDMA Google Nexus One to the market, the Droid Incredible packs the current holy trinity of big screen, fast processor and high-resolution camera, together with the UI benefits of HTC Sense. Can it really live up to its boastful name, though?

Until the EVO 4G arrives on Sprint later this year, the Droid Incredible is HTC’s best-specified Android handset on the market. The spec sheet may not look massively different from the Desire and the Nexus One, but in the hand the Incredible actually feels a pretty different beast. Actually slightly narrower and shorter than the Google-branded Nexus One, both phones weigh the same but – somehow – the Incredible feels lighter in the hand. Nonetheless, it feels well made and the design is pleasantly squared-off; the curiously ridged battery cover may look a little like a topographical map, but it’s certainly distinctive in among a crowd of touchscreen-centric smartphones.

As with the Nexus One and the HTC Desire, the Droid Incredible’s capacitive OLED display is bright, color saturated and crisp, though taking it outdoors can leave you forced to boost backlighting as it doesn’t handle direct sunlight as, say, the Motorola DROID’s LCD panel. It’s also possible to see what looks like the dotted tracks of the touchscreen frame if you tilt the phone and look at it askance, though in general use that’s not so visible. What we did notice more often is the extra screen accuracy in comparison to the Nexus One: no missed taps, and far better precision when it comes to hitting onscreen graphics. HTC tell us the Incredible has a tempered glass panel with a fingerprint-resilient oleophobic coating; fingerprints may slide off, however, but scratches are another matter, and in less than a day’s use (with the Incredible dropped into the same pockets as we keep our Nexus One in) the screen had already gathered a couple of scars. Usually we’d say screen protectors are a matter of personal preference, but with the Droid Incredible we almost think Verizon should have included one in the box as standard.

Underneath there are touch-sensitive buttons for Home, Menu, Back and Search – in a frustratingly different order to those on the Nexus One and Motorola DROID, though the same as the Desire – and an optical joystick, all of which work well. On the left side there’s a volume rocker and the microUSB 2.0 port, but like other HTC-made phones there’s no camera shortcut; considering the capable optics on the Incredible that seems short-sighted. 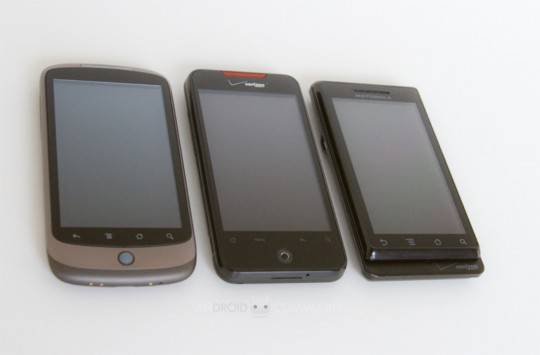 Like the Nexus One, Motorola DROID and the Europe-only HTC Desire, the Droid Incredible runs Android 2.1, Google’s latest version of the platform. That includes features such as Google Maps Navigation (though VZ Navigator is also available if you prefer Verizon’s own service) together with the usual package of Google Experience software: Gmail, the multitouch-capable browser and more. There are thousands of other titles available in the Android Market, though it’s worth noting that you can still only install them to the 512MB of ROM, not the 8GB of data memory.

Of course, what helps distinguish the Droid Incredible is its use of HTC Sense, the manufacturer’s custom UI and widget framework that turns stock Android into a far more attractive proposition out of the box. In addition to a boosted homescreen with seven rather than the usual five panes, there are HTC-made widgets for weather, social networking and settings, a preloaded Twitter client called HTC Peep, and – the most recent addition – Friend Stream. Where Sense previously pulled down Flickr, Facebook and Twitter updates to be displayed on a per-contact basis, Friend Stream pulls all three into a single timeline (complete with a desktop widget) supporting replies, comments and the ability to post your own updates to one or more networks.

Friend Stream works well, and Peep remains one of the better Twitter apps, though most existing Android users already have their own favorites for handling social networking. Sense covers fewer networking platforms than, say, Motorola’s MOTOBLUR system, but we prefer the way HTC have finessed the experience. Sense also boosts messaging support, replacing the default Mail app with a new client that boasts native Exchange support for mail, contacts and – unlike Android 2.1 normally – calendar entries. Mail handling is particularly good, with separate views for flagged, unread or VIP messages, meeting invitations, and a decent threaded “conversation” view. As for the browser, that gets Flash Lite 4.0 support (not to be confused with full Flash 10.1, but enough to allow for streaming video; still, performance varies depending on your connection and the bitrate of the content you’re watching).

Of course, the flip side of a manufacturer-customized UI is that it can add up to delays when Google push out a new version of the Android OS. As we’ve seen on previous Sense devices – all the way back to the original HTC Hero, in fact – the difficulties involved in getting a separate user experience to play nicely with the underlying platform usually adds up to a significant wait on the part of the user. HTC generally commit to releasing an updated OS version eventually, but pinning them down to a timescale is almost impossible. While Android in its bare, unadulterated form may lack the instant appeal of Sense, as we said in our HTC Desire review there’s always the reassurance that an unmodified device will see a quicker OS upgrade. Nonetheless, as we also said in our Desire piece, that caution for tomorrow does mean that users run the risk of missing out on a great experience today.

Perhaps the most obvious spec bump over the Nexus One and other recent HTC devices is the Droid Incredible’s camera. Packing 8-megapixels with autofocus and a dual-LED flash, it puts the Incredible – on paper at least – on a par with the Sony Ericsson XPERIA X10. The flash is certainly brighter than the single-LED on the Nexus One, though as ever it’s not quite as useful as a proper Xenon flash. 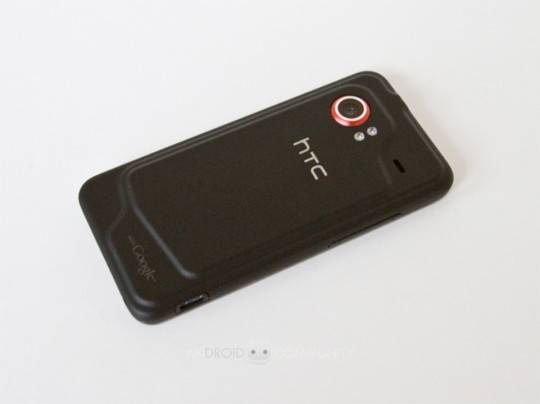 As you’d hope, the Incredible’s still photos are, well, incredible. Packed with detail, they’re a noticeable step up from what the Nexus One is capable of; considering we’ve used the Google-branded handset for liveblog event photos (thanks to its ability to automatically upload shots to an online gallery) that’s saying something. The Droid Incredible also benefits from HTC’s enhanced camera app, which has a far greater range of settings than a regular Android phone. Like we saw on the Desire, there’s granular control over exposure, contrast, saturation and sharpness, ISO ranges from 100 to 800 and optional geotagging and face detection. Unlike the XPERIA X10 there’s no way to tie face detection into the address book, but we prefer the shots from Incredible in comparison to the Sony Ericsson handset.

Unfortunately, video isn’t quite so successful and, despite having the same megapixel count as the upcoming EVO 4G on Sprint, the Droid Incredible is limited to recording 800 x 480 footage rather than 720p HD. Of course, with no HDMI output that would’ve perhaps been overkill anyway, but given the relatively large amount of onboard storage (and the popularity of point-and-shoot camcorders) we’d have liked to have been able to fill it up with higher quality video. The clips it can record are reasonable but not outstanding, and while you can turn on the LED flash to act as a camera light you’ll still want to limit yourself to brighter scenes (and preferably outdoors in daylight).

Phone quality on the Droid Incredible is pretty much on a par with other recent smartphones, though we wish HTC had fitted the noise-cancelling microphone system as on the Nexus One. If you’ve not used that handset then you probably won’t miss the DSP, however. Verizon’s data network is a strong performer too, though given the power users we’d expect to be opting for the Incredible, leaving out global 3G/voice functionality seems incredibly short-sighted.

Our biggest concern for the Droid Incredible is its battery life. HTC reckon you’ll see up to 5.2hrs of talktime or alternatively up to six days of runtime from a full charge of the standard 1,300mAh pack, but in our experience that’s hopelessly optimistic. With push email switched on and the various social networking features regularly updating, we’re seeing under a single day’s use from the Incredible. Turning them off, of course, ekes out more runtime, but arguably at the expense of the very connectivity that likely played a significant role in your choosing the smartphone. 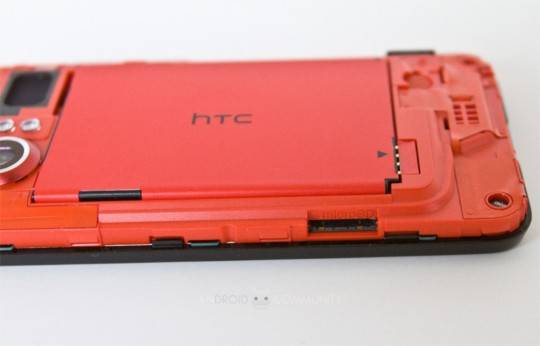 If HTC had offered a charging cradle – as they do for the Nexus One – then the Incredible’s thirst would’ve been easier to live with; we’ve found we’re more likely to drop the Nexus One into its dock when we’re at our desk than we are to plug similar handsets into their regular wired charger. Unfortunately, not only does the Incredible lack charging contacts on the base, for use with a cradle, HTC have also put its microUSB port on the side. That’s really not ideal for either official or third-party docks.

It’s a frustrating limitation that mars an otherwise excellent smartphone. The Droid Incredible by HTC has the speed, optics and user-friendly UI that a top-flight handset demands, but we found ourselves a little too conscious of the battery gauge for comfort. Of course, it’s not the first device to have such a problem, and at least you can switch out the battery if you have a spare. Experimentation with the wireless and data sync settings will likely be enough to balance functionality against longevity, but that’s still a hurdle to first-time users tempted in by Android’s growing software availability and HTC’s slick interface.

Put in that effort, however, and you’ll be left with a highly capable device with plenty to offer. Beyond concerns over HTC’s Android update schedule, it’s hard to imagine a reason why Verizon fans would hold out for the upcoming CDMA Nexus One, unless they were one of the (increasingly rare) people who still use their phone for voice calls and, as such, particularly valued the Google phone’s better audio quality. If you’re more interested in taking photos, having an intuitive smartphone experience out of the box and getting access to Verizon’s customer support network, the Droid Incredible by HTC seems the device to choose.