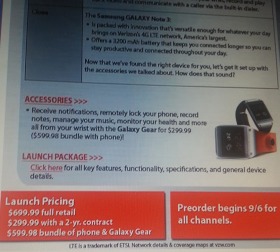 Samsung‘s new Galaxy Note III and Galaxy Gear are the hottest topics this week, so it’s not surprising that carriers have been quick to reveal their offerings. But while Verizon has been so far silent, a leaked photo shows us just how much the carrier is planning to charge for the devices.

T-Mobile announced that the Samsung Galaxy Note III will be priced at $199 a month on its Simple Choice Plan, down with 24 equal monthly payments of $21.00. The Galaxy Gear, on the other hand, will cost $299, plus taxes and fees. The carrier hasn’t opened up pre-orders yet but is conducting a raffle for a chance to win the devices for free. AT&T said that it will be taking pre-orders starting today and has the Galaxy Note III up on its AT&T Next program for $35 per month, or $299 with a two-year contract. It hasn’t given out details about the Galaxy Gear except that it will be coming soon.

Based on the leaked information, Big Red will be offering the smartphone for comparably competitive prices. The Galaxy Note III will also be available for $299 on contract, with a full price of $699. The smartwatch, however, is indicated to come in a bundle with a phone for $599.98. Simply based on the document, it doesn’t seem like the Galaxy Gear will be sold separately by Verizon.

We may get to see Verizon’s real plans soon, as it will be opening pre-orders today as well. No launch date has been given yet, but it probably would be around the first week of October similar to AT&T and T-Mobile.