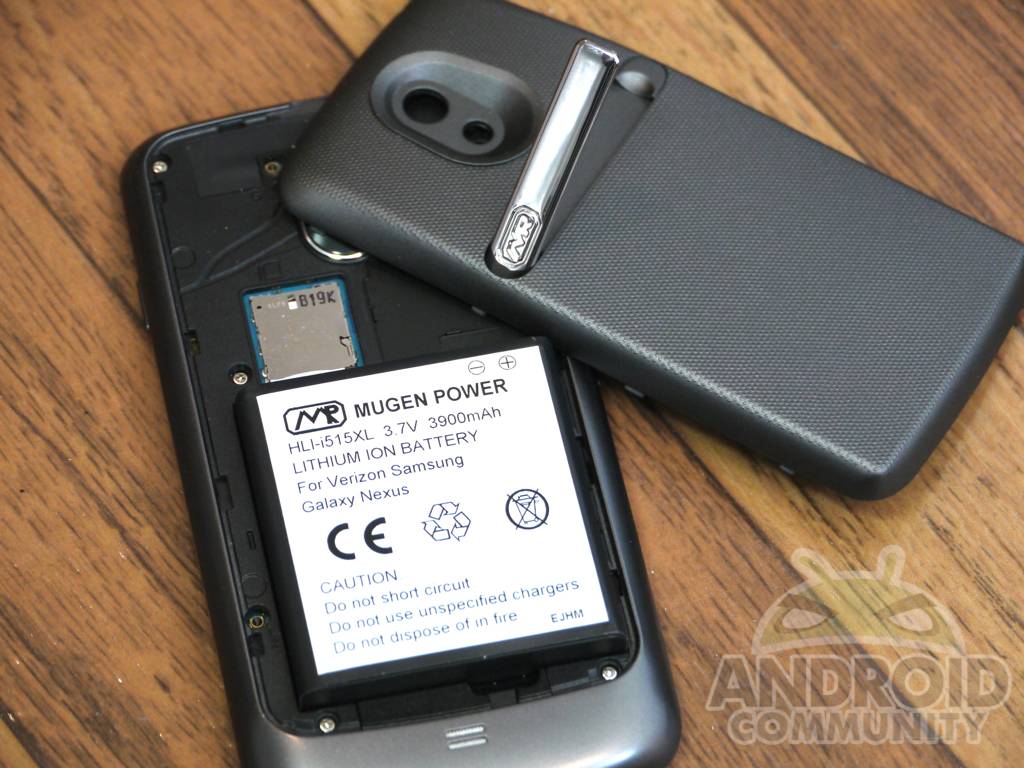 So you have a Verizon Samsung Galaxy Nexus with 4G LTE and a huge 4.65″ display and you’d love some longer battery life right? Say hello to Mugen Power and their 3900 mAh extended battery and door for the Verizon Gnex. Just arriving on our doorstep we’ve decided to give it a test and see if we can make it through a good part of the weekend from a single charge. Read on past the break for our hands-on video and pictures.

Yes you read that right, this battery is 3900 mAh — giving you over two times the battery life of the stock 1750 mAh battery provided by Samsung. Being a little thicker than most, Mugen has provided us with a replacement battery cover with a nice soft touch matte back and hey, look at that, it even has a kickstand. I quickly tossed the battery into my Galaxy Nexus and threw it on the charger. I’ve already done a battery cycle and will charge it fully again before testing it all weekend.

For roughly $98 dollars the build quality and kickstand feels a little cheap but if this thing will truly make my Galaxy Nexus last around 2.3 times longer, I’m all game. Obviously a lot goes into testing a battery and everyone’s usage patterns vary, but I’ll be testing it against my own use as I’ve taken plenty of screenshots throughout the past few months.

Mugen suggests you charge it past 100% and leave it plugged in a good 8 hours total the first 3-4 times you charge it up, to get the most of the battery’s capabilities. At first glance the kickstand doesn’t sit completely flush so it wobbles a tiny bit while attempting to lay flat on a table, but we’ll break down the build quality, price, and overall benefits in our full review early next week.

Enjoy the pictures below, head to Mugen Power to get your own if you’re already interested, and stay tuned for more info coming soon.