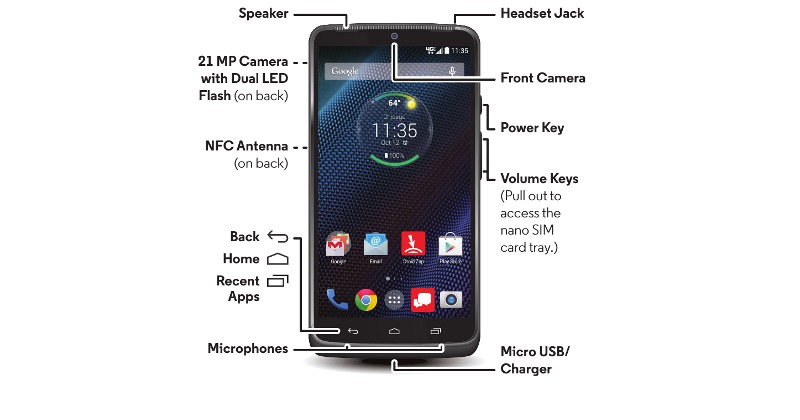 We’ve heard and seen leaks about Motorola‘s new DROID device heading for Verizon and so far it has painted a rather surprising picture of a smartphone that could very well have been Motorola’s flagship. Now a leaked manual supposedly for the Verizon DROID Turbo has popped up that seemingly confirms that more than premium image of the device. But despite being a carrier-exclusive (at least as far as we know), it seems that the DROID Turbo still offers that same “vanilla” Android experience as the Moto X.

Of course, manuals rarely detail technical specs of a device, but it does mention a few things. In particular, it mentions the “5.2” ultra high-definition display”, meaning at least 2560×1400. While the new Moto X does have that same screen size, it was only limited to a resolution of 1920×1080 Full HD. There is also noted to be a 21 megapixel dual LED flash camera at the back, versus the 13 megapixels on the Moto X. That said, it does share some traits in common, like support for Moto Turbo Charging for super fast charging in a pinch.

As to the physical design of the device, the DROID Turbo might disappoint in some aspects. First is the rather unfortunate return to a single front-facing speaker, versus the dual setup that the new Moto X sported. Capacitive navigation buttons also take up bezel space (which could have probably been given to a second speaker) instead of the Google-preferred software ones. One rather interesting detail about the phone’s design is that the volume rocker actually doubles as a nano (yes, not mirco) SIM card slot, an ingenious way to economize on space.

Hardcore Android fans might be happy to know that the same OS experience on the Moto X remains unchanged on the DROID Turbo, at least based on this manual. While there will of course be an amount of bloatware from Verizon, the overall user interface looks largely untouched, aside from a different wallpaper and a new cicular clock homescreen widget. The now staples of the Moto software experience are happily also here, including Moto Voice, Moto Assist, Moto Display, and even Moto Actions.

It still boggles mind why Motorola would have a smartphone that practically unseats its own flagship just a few months after unveiling it, and especially one that’s exclusive to a carrier. Conspiracy theorists might see some plotting by Verizon behind the scenes. That is presuming this manual is accurate. But even without it, previous leaks have already suggested that the Verizon DROID Turbo is probably what the new Moto X could have been.