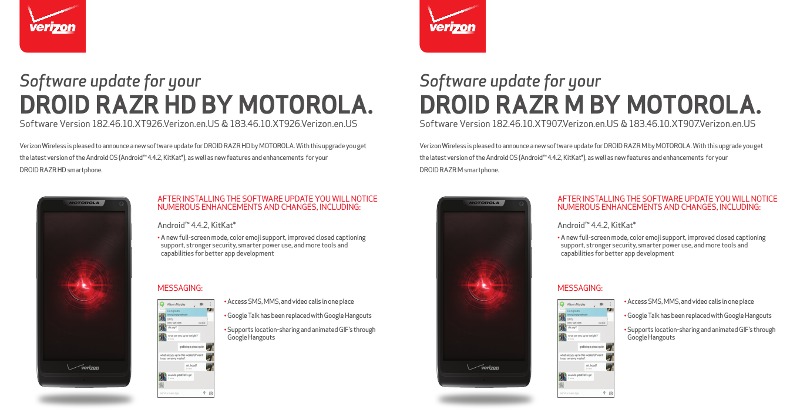 They day of rejoicing has finally arrived for owners of some of Motorola’s older Android smartphones. After an apparently smooth soak test, the Android 4.4 update for the DROID RAZR HD, the DROID RAZR M, and even the DROID RAZR MAXX HD is finally rolling out to Verizon customers.

Motorola, and Verizon, delivered on its word a month ago that it would be releasing the awaited Android KitKat update to these rather dated devices in a few weeks. Yesterday, XDA members revealed that they had received notification about the soak test for the update, which fortunately did include Android 4.4 inside. Without any critical issues blocking the way, Verizon has now unleashed the update to their customers.

You might already be tired of hearing about KitKat updates, but this batch is notable in some way. These three smartphones aren’t exactly new. All three of them were launched around the last quarter of 2012. Their specs by now match mid-tier smartphones at best. This update, then, is somewhat of a testament to Motorola’s commitment to update these devices, as well as Android 4.4’s ability to run on a wide variety of hardware configurations.

The feature changelog for these updates are the same ones you’d find on any Android 4.4 update, including the installation of Hangouts as the primary messaging app as well as the introduction of the immersive viewing mode. Also included in the update is a new version of Droid ZAP, which allows users to easily share HD videos and pictures. As with any update, especially big ones, it will take some time for it to reach all devices, so the waiting time could be best spent in backing up the device and making sure you have enough space and battery to perform the update.