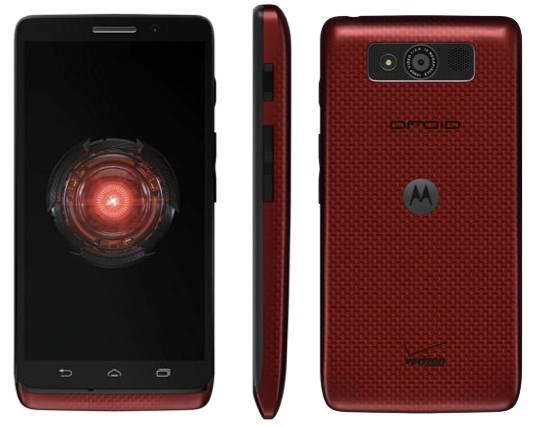 Images of a red DROID Mini leaked back in October and similar to how Verizon was quiet at the time, they have just as quietly slipped the handset into the available lineup. As of today, the Verizon DROID Mini has gotten a color refresh. The handset remains available in black and can now be purchased in red.

The price remains the same, at $49.99 on a two-year agreement. Other price options include $399.99 with no agreement, or $0 down and $16.81 per month under the Verizon Edge program. Regardless of the payment option you choose though, the specs and features will be the same and they begin with a 4.3-inch display at 1280 x 720.

Aside from being in a smaller overall package, the DROID Mini is rather similar to the Ultra and Maxx. That is to say the DROID Mini has Touchless Control for access to Google Now as well as Active Display for notifications and Motorola Assist. The handset is running Android 4.2 Jelly Bean and powered by the Motorola X8 Mobile Computing System with 2GB of RAM.

Remaining specs include 16GB of internal storage, WiFi 802.11 a/b/g/n, Bluetooth 4.0, 2 megapixel front-facing camera and 10 megapixel RGBC camera with quick capture. The DROID Mini also has a 2000 mAh battery, which Verizon touts as being able to offer up to 28 hours of life.

But all that having been said, this simply means those who were waiting for that October leak to get official can now move forward with a purchase. While the DROID Mini isn’t the newest device in the lineup, it still packs a solid set of specs, especially with a $50 price point. And given the ‘smaller’ 4.3-inch display size, this could be a good option for those looking to stay well under 5-inches.