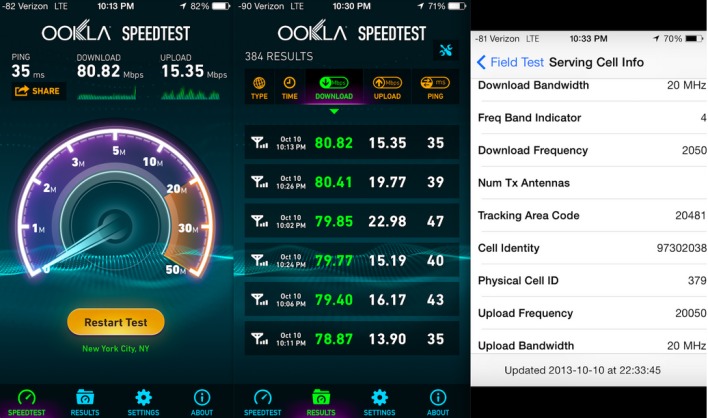 The US network market is fiercely competitive, with every carrier trying to one-up the others at every turn. It seems that this round might soon belong to Verizon as sightings of its double-wide LTE network increase.

Such sightings have happened in Chicago and Los Angeles, but this time GigaOM was able to snag an actual confirmation from a tester in New York City. Based on the results of the Speedtest iPhone app, the tester got a download speed of 80 Mbps, with an uplink speed of 15 Mbps. Quite impressive, especially considering AT&T‘s current LTE network is said to only average 16.7 Mbps, with a top rate of 75 Mbps.

The massive increase in speeds is thanks to Verizon’s use of a full 40 MHz spectrum which it has started deploying in markets across the country. These networks are, in fact, theoretically capable of up to 150 Mbps downlod speeds, so the low test results are actually quite puzzling. But even at 80 Mbps, Verizon’s new LTE offering will surely give competitors something to worry about.

Of course, those numbers are still bound to change, considering the new LTE network is still not officially available. Other factors will come into play once it launches, such as the amount of users on the network, as well as Verizon’s own throttling and restrictions.