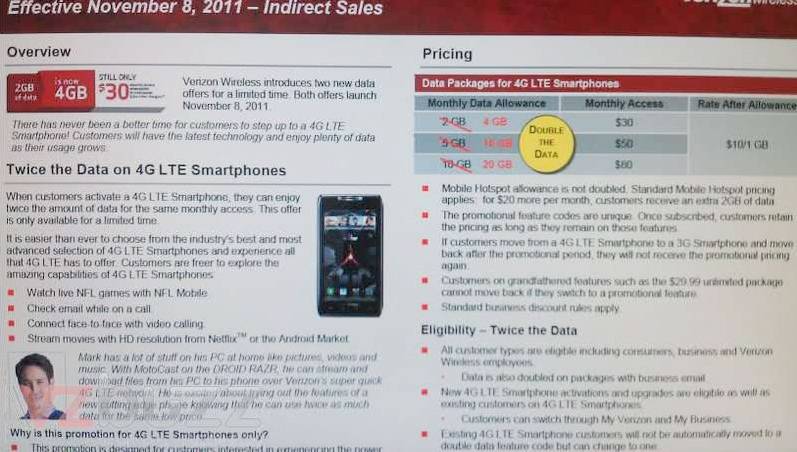 In cased anyone missed it, Verizon is starting a double your data promotion tomorrow. Basically if you sign up and pay for 2GB of smartphone data a month, they’ll be nice and give you 4GB for the same price — take that AT&T. The deal goes live tomorrow and is available to both new and current Verizon Wireless customers and we now have a few additional details regarding this “Double Data” deal.

The image can be seen in the full size gallery below. What we have is a brand new double data promotion that starts tomorrow, November 8th, and users will get double for their money. We have reached out to Verizon regarding how long this promotion will last and be sure to update as soon as we hear anything. Hopefully it lasts long enough for those waiting to buy the Galaxy Nexus, it might be in stores come the 21st. Verizon is offering this deal on all current tiered data plans, obviously unlimited doesn’t count here.

According to some leaked documents from Verizon this promo deal will actually last for the life of the smartphone plan. So as long as you don’t change to something else later, you’ll always have the awesome low price and get double the data. Basically grandfathered in until you decide to change something, then they’ll take any chance they get to make you pay more. The post this morning we didn’t know how long this would last for customers, but now we know. Sadly mobile hotspot data and pricing does not count here, only for 4G LTE smartphone data plans.

As soon as we hear anything official from Verizon regarding how long the double data promotion will be available for subscribers we will be sure to update so everyone can be prepared to jump ship if necessary. Check out the full sized document by clicking below.