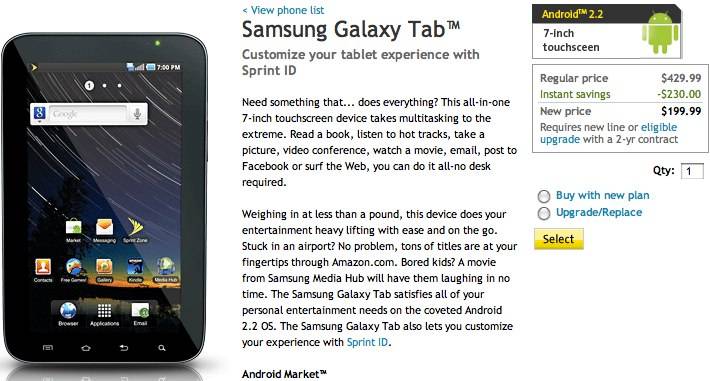 Sprint and Verizon have slashed pricing for the Samsung Galaxy Tab, with both carriers now asking $199.99 for the 7-inch tablet. The extra discounting makes the CDMA networks the cheapest in the US for picking up the Galaxy Tab; T-Mobile USA is asking $249.99, while AT&T offers the Tab agreement-free for $549.99.

The move could well be a push to clear out Galaxy Tab stock ahead of the new range of Android 3.0 Honeycomb tablets that are expected over the coming weeks and months. Samsung is yet to confirm whether the Galaxy Tab will get Honeycomb or remain on Android 2.2 Froyo as it launched with.

That hasn’t stopped the third-party hacking community from attempting to do what Samsung seems reluctant to attempt; xda-developers already have a rudimentary Honeycomb ROM for the CDMA version of the Galaxy Tab [via The Unlockr]. However it’s still lacking in most of the day-to-day functionality most users would require.