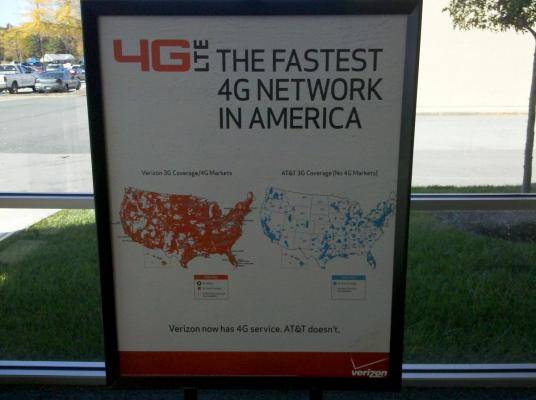 The war between AT&T and Verizon has most recently come in the form of a small poster ad in what looks like inside a Verizon store. Verizon attempts to slice through AT&T’s jugular with a 4G blow to AT&T’s 3G network(huh?).

To the common eye, this picture looks as it is comparing AT&T’s 4G network, but if you take a second glance you will notice that they are simply comparing 3G networks, but with the addition of tiny green dots that mark the areas where LTE is being installed. AT&T’s map is the usual map with scattered blue dots pitted up against Verizon’s sea of red dots on the map of the US. Verizon always seems to be targeting AT&T, but I’m not sure why they don’t ever attack T-Moblie or Sprint, who both already have full functioning 4G networks. Expect to see more Verizon ads in the future that will be yet again targeting AT&T.