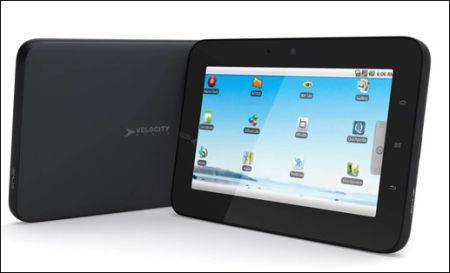 It’s been a little while since we’ve heard from Velocity Micro. Their Tablet and Reader were a notable topic a few months back, but since then they seemed to just drop off the map entirely. Apparently they were hard at work on making their devices the real deal, because Velocity Micro has just announced that the pair of Android-powered devices are available for pre-order right now.

As the title suggests, you get two options here. The first, the Cruz Reader, will cost you $199.99 to get your hands on. It has a touchscreen display with a resolution of 800×600. It has 256MB of internal storage, but there’s a 4GB microSD card included in your purchase. Which can be expanded. The Tablet features a touchscreen display as well, with a 16:9 800×480 display. It has 4GB of on board storage, but there’s an additional 8GB included with the microSD card thrown in for good measure. Both devices feature WiFI, but the Tablet is the only one that has 802.11b/g/n.

The Cruz Reader is specifically meant to e an eReader device, and it’s only featuring Android 2.0. While the tablet is more for the “broad” user, it has Android 2.1 under the hood. We’re not exactly sure how these stand out amongst the crowd, but if you’re a fan of Velocity Micro, and you’re in the market for a new tablet or eReader, then perhaps you’ll want to pre-order the Reader and Tablet now.