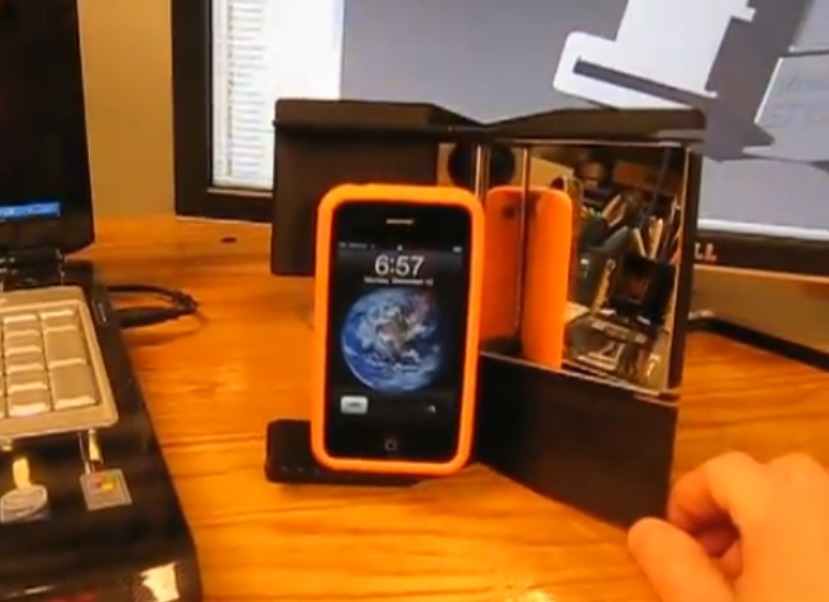 So you say you’ve got a device with only a rear-facing camera, and you wish you were part of the future generation of devices that also have a fron-facing phone, yes? Take a peek at this little lady. It’s called Vainworks – a handset stand setup that uses mirrors (and magic!) to turn your camera backwards (or frontwards, however you look at it I suppose.) This project works with a small (but expanding!) list of smartphones including: Motorola Droid, Motorola Droid 2, Motorola Droid X, HTC Droid Incredible, Samsung Galaxy S (AT&T), Samsung Focus, HTC Droid Eris, and some non-Android phones including iPhone 2G, 3G, and 3GS, as well as Palm Pre.

This stand works with basically ANY phone with a rear-facing camera, but the designers of Vainworks say that the closer the camera is to the edge of the phone, the better. If the camera is closer to the center, the amount of camera that can be seen with the stand. One stand costs $17.95, a pack of two costs $25.00. Does that sound awesome? It sounds awesome to us. Go check it the heck out over at Vainworks.com now! Only in the USA for now. Check out this video and get all pumped up.