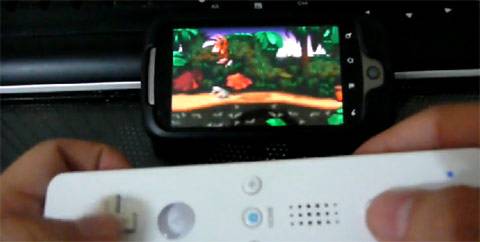 This is an awesome hack, it’s actually not much hacking involved but we’ll still call it that because it sounds cooler. You can now use your Wii remote to play games on your Android device. There is no need to use onscreen buttons now.

In the past few weeks we’ve seen controllers added to Android devices as an overlay on the keys and even an Atari controller hacked to work with a G1. This involves less effort than those, all you need is an emulator, an Android handset, a Wii remote and an app called Wiimote and you’re in business. Checkout the video below then gets started on your device.

This demo allows you to interact with a Wii Controller using a Bluetooth enabled device.