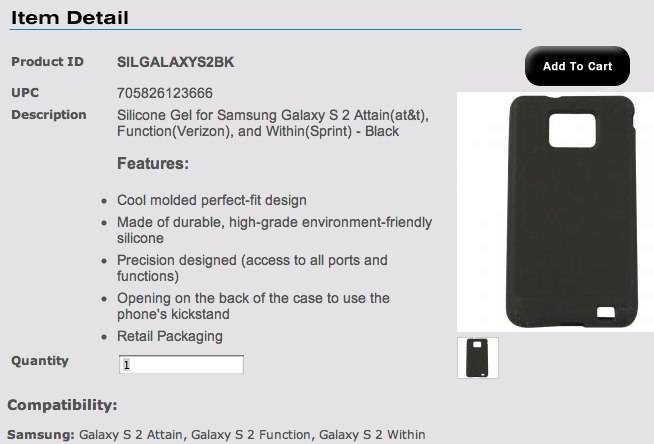 Samsung’s Galaxy S II is one of the mot coveted Android smartphones of the moment, but while Europe and Asia is able to play with the Super AMOLED Plus handset, North America is still waiting for its taste of overclocked Exynios. Now it seems US naming and carrier support has been leaked courtesy of a premature accessory listing.

According to the Wireless Xcessories Group, their silicone gel back cover will fit the Samsung Galaxy S 2 Attain on AT&T, the Galaxy S 2 Function on Verizon, and the Galaxy S 2 Within on Sprint. T-Mobile USA is notable for its absence; that could be because the carrier isn’t getting a version or, perhaps more likely, because aesthetically it is different and the gel wouldn’t fit.

Given the success of the original Galaxy S in North America, it’s no great surprise that Samsung is working with so many carriers on its successor. Of course, we still don’t know quite when it will arrive.