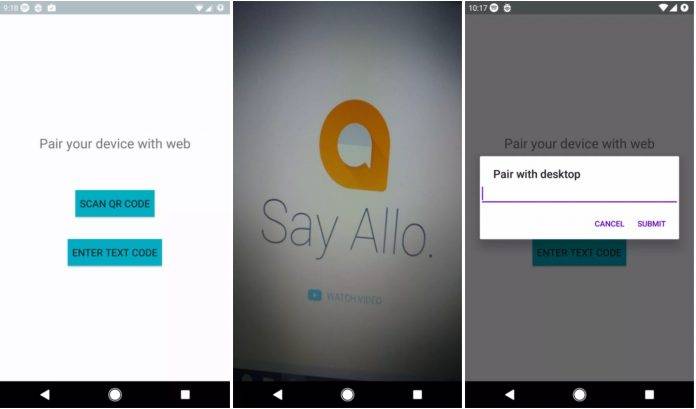 Google Allo may still not be the success that Google was expecting but it seems like they’re not giving up on it just yet. One of the upcoming things that is coming, at least according to tweets from Nick Fox, VP of Communication, is a desktop version of the messaging app. This may be something that will help them grow the product as it will appeal to those who want to be able to use a messaging service across devices.

It seems that the way the desktop version will work is a little bit similar to how WhatsApp did it previously. This is based on how the current Allo app is and it basically has to do with QR code scanning. Currently, the elements are set in place, probably for when the desktop client officially arrives. We’re referring to the QR code scanning which will probably be used for pairing your device with the web client.

There may also be an option to enter a text code to be able to verify your account and use Allo in both its mobile and desktop iterations. However, while the basics are already in place, as long as there’s no official word from Nick Fox or Google themselves, all of this is just speculation of course. But logically, that’s probably how it would go about.

Allo is pretty decent, although it has to play catch up with already established messaging apps. Having a desktop version is also nothing new, just like with WhatsApp, Viber, Messenger, etc. It does put them on a level playing field. Let’s see what other magic tricks Google has up its sleeve.