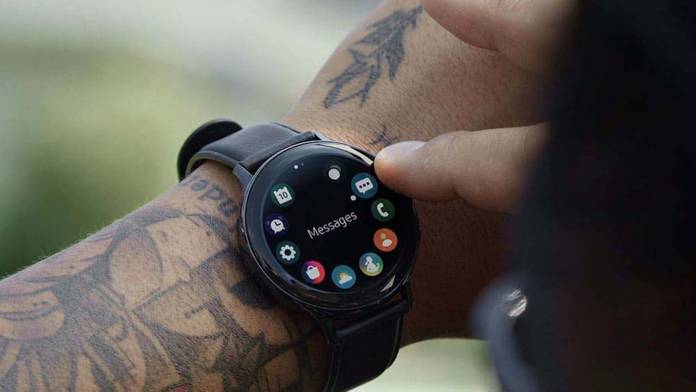 Samsung is reportedly working on a new smartwatch, although we don’t know yet if it will be a Galaxy Watch 2 or the Galaxy Watch Active 3. But what we’re hearing now is that the upcoming wearable will have twice the storage of the existing models. This means we’ll get 8GB of internal storage to make room for more apps or files saved on your wrist. They may also be offering it in two sizes but we don’t know yet if it will be the same or bigger. And will we be getting a 5G smartwatch anytime soon?

SAM Mobile reports that we can expect a new smartwatch from Samsung soon and that it will be model numbers SM-R840 / 845 and SM-R850 / 855. What will be different with this device is the doubling of the internal storage from 4GB to 8GB. Having additional storage is probably always welcome since we’ll never run out of apps to install or files to save. The size may be 40mm and 44mm which is the usual offered or they may even be bigger.

Each model will have a cellular variant and will “most definitely be LTE-enabled”. There will also probably be updated internal specs and new software features. Plus the battery will possibly have a 330mAh battery, which is an improvement over the 247 mAh that battery of the 40mm Galaxy Watch Active 2, which was released just six months after the Galaxy Watch Active.

There may even be the possibility of a 5G smartwatch since Samsung is on a 5G track, but really, who needs a 5G wearable anyway? It may seem like too much to have that technology on a smartwatch and 5G is still in the early stage yet so this may be one of the rumors that is a long shot and may just be speculation. But in any case, having 8GB of storage is already a good thing.

The development of this smartwatch is still very much in the early stage according to sources. So it’s highly unlikely it will already be announced or hinted at at the upcoming launch of the Galaxy S20 and Galaxy Z Flip happening this February 11.