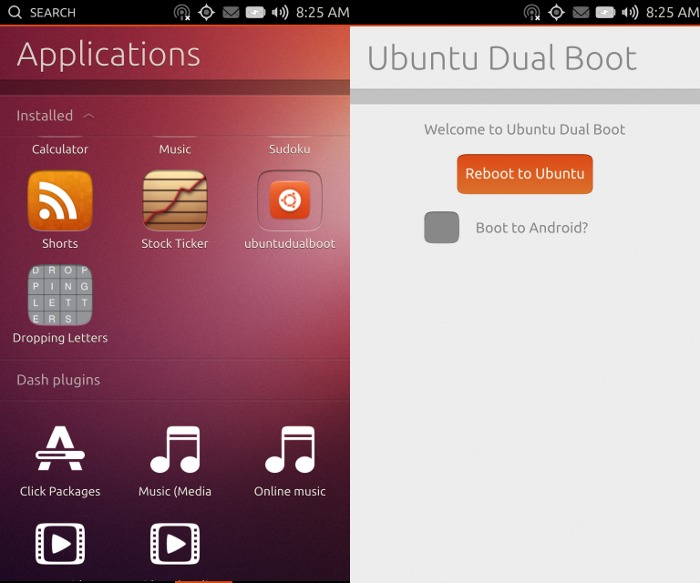 There have been a few dual-boot solutions for Android users. One in particular came from MoDaCo and allowed users to dual-boot between the stock and GPe versions of software on the HTC One and Samsung Galaxy S 4. And well, it looks like there is another option for those looking to dual-boot Ubuntu and Android.

The details were recently shared on the Ubuntu Developer blog and right from the beginning, it is made clear how this isn’t something that will be right for everyone. To that point, it was suggested this be left to those who are comfortable “flashing devices and with their partition layout.” While this is recommended for advanced users, the actual process of switching back and forth appears pretty simple.

Both the Ubuntu and Android sides will have an app called Ubuntu Dual Boot that will allow you to switch back and forth. Furthermore, the Android app does the management duties to include the initial installation, any future upgrades and rebooting into Ubuntu. On the other side, the Ubuntu app simple allows you to switch back to Android.

Anyway, getting back to the part about this being aimed at more advanced users — there is another limitation. The instructions mention the requirement of a Nexus 4 as well as Android 4.2 (or higher), 2.7GB of free space on the device and ADB tools running on your desktop computer. In addition, the Nexus 4 needs to have an unlocked bootloader.

In the end we aren’t sure this will mean lots of users will suddenly begin running Ubuntu, but is is interesting to watch the progress being made and if nothing else, this just gives developers the option to run Ubuntu, without making it the primary commitment. The full directions can be found using the source link sitting below.