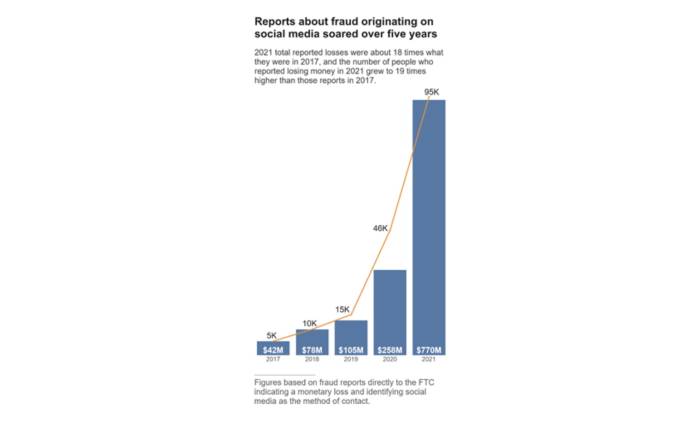 You would think that consumers are now smart enough to fall for online scams. Unfortunately, these scammers are also getting smarter at tricking people out of their probably well-earned money. The Federal Trade Commission revealed that U.S consumers lost $770 million due to social media scams in 2021. That’s an increase of 18 times the amount from back in 2017, mostly due to new scams related to cryptocurrency and online shopping. These scammers have figured out that social media is a very profitable platform to commit fraud.

In a report they chose to call “Social media a gold mine for scammers in 2021”, the FTC shared that consumers have lost hundreds of millions of dollars to scammers and that they were first contacted through social media first. The numbers are now 18x higher than the social media fraud reported last 2017. This is most likely because of the recent popularity of things like online shopping and cryptocurrency, giving scammers more areas with which to get money from unsuspecting consumers.

Chances are most people would think that it’s the older ones that are getting scammed out there. But the report also shows that adults aged 18-39 reported fraud losses 2.4x higher than the older aged group of adults over 40. All in all, more than 95,000 of these fraud victims reported that the scammers first contacted them on social media and that is more than double the number from 2020 and 19x from 2017. They first saw a post, message or ad on social media that led to them being victimized.

Not surprisingly, the data shows that the platforms where most of these scams originated are Facebook and Instagram. Online romance scams were some of the most frequent kind that occurred on the two Meta-owned social media networks. Social media scams accounted for 26% of fraud losses in 2021 followed by 19% from websites and apps, and phone calls at 18%. More than half of investment scams began on social media as well.

The FTC report also shows that investment, romance, and e-commerce scams combined for 70% of the social media scams from 2021. Cryptocurrency and e-commerce seem to be a growing platform for these scams so hopefully, companies involved in those will also invest heavily in protecting their consumers.