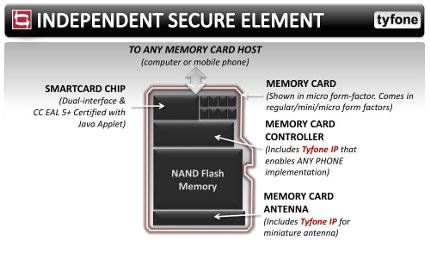 Wow, this sounds like a great idea, Tyfone has developed a system and are now putting NFC chips, controllers, and antenna’s into Micro SD and SD cards. This makes it possible for mobile phones and other PDA like devices to easily add NFC capabilities to their device just by simply changing the SD card they are using. Sounds like a great plan, don’t have a Nexus S, just get a Tyfone MicroSD Card.

According to them the first field trials of Tyfone’s u4ia Secure Memory Card (SMC) technology are now expected to take place during the first half of this year, following successful internal testing at 21 organizations around the world. Tyfone’s u4ia (pronounced ‘euphoria’) has some serious potential to be very popular, especially with how NFC has been taking off lately, not to mention Google jumping into NFC head first as principle member.

Tyfone’s u4ia Secure Memory Card would be able to break free the handset availability problem and allow any device with a SD slot to have NFC. This goes for most cell phones these days, as well as camera’s and GPS systems and more. For more information on what Tyfone’s cards contain see below:

Even though we welcome as many phone manufactures as possible to integrate NFC into mobile handsets because of the possibilities it holds, Tyfone’s solution looks to be a very good one. We will report back with more on this as we hear it.