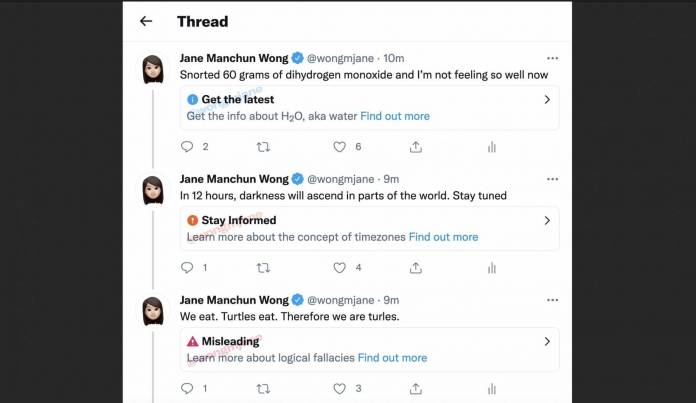 While Twitter is a good source of information, the misinformation that has been going around the social network can also be a headache for level-minded individuals and for Twitter itself. They have tried different things like labeling things like hoaxes, misleading posts, and even going so far as instituting a long ban for the former president of the U.S. But there’s still a long way to go when it comes to curbing this problem. Twitter seems to now be working on more granular warning labels for things like these.

Our constant source of social media information, tech blogger Jane Manchun Wong once again uncovered something about Twitter. This time around it’s about their ongoing campaign against misinformation and disinformation on the platform. Wong says there will be three levels of warning labels that we’ll be seeing soon: “Get the latest”, “Stay informed”, and “Misleading”. They are of course accompanied by “find out more” links as they’d want to point people to the correct information.

Twitter is working on three levels of misinformation warning labels:

“Get the latest”, “Stay Informed” and “Misleading” pic.twitter.com/0RdmMsRAEk

Wong clarified that the cheeky tweets and the warning labels were something she created for demonstration purposes. But the feature and the labels themselves were from Twitter. The labels have the new “Chirp” font from Twitter which is part of their continuous branding efforts. The font is supposedly a cross between American Gothic and European Grotesque styles and is meant to be a balance between messy and sharp.

There seems to be a lot going on with Twitter right now, what with the recent launch of audio-only feature Spaces, hints about subscription services and ways for content creators to monetize on the platform. Wong actually just recently told us about Twitter Blue, the monthly subscription service that they will be launching soon which will give subscribers additional features like Undo Tweet, Color themes, a Reader Mode, and a bookmarking feature.

There’s no indication yet when we’ll see the misinformation warning labels out in the wild but if Wong has uncovered it, it might be pretty soon. It would be interesting to see how users will receive it when their tweets are labeled as such.