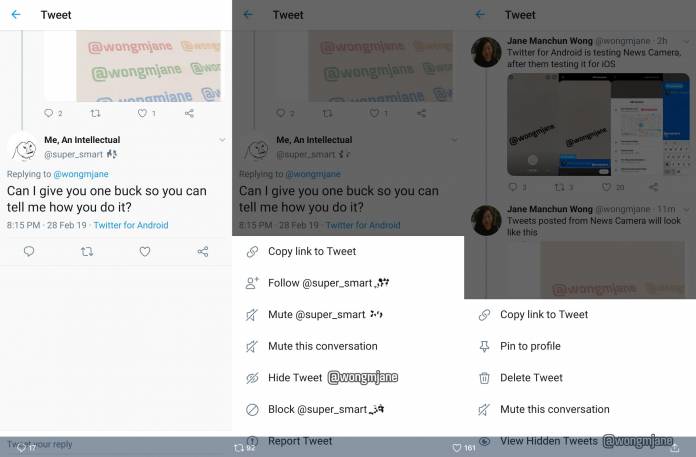 Most people either love or hate Twitter or maybe even both at the same time. It’s become both a robust platform for real-time conversations and also a toxic battleground for controversial or polarizing topics. It’s become an open market for ideas and opinions and also a mechanism to harass and bully people whose opinion or lifestyle doesn’t match yours. Twitter is now testing out an option to hide replies on your tweet if you feel like moderating the conversation.

According to Twitter Senior Product Manager Michelle Yasmeen Haq, they are trying to find the balance in handling four things in their ecosystem: authors, repliers, the audience, and the platform. This new thing they’re trying out is to part of that effort, giving the original poster control over what conversation while at the same time still giving the audience the chance to witness and even participate in the dialogue.

How it will work is that the person who started the conversation will see a “hide tweet” option when they tap on the share button. The reply isn’t really deleted but just hidden and anyone can see that some replies have been hidden but can still tap to view them. It’s an alternative to just muting or blocking a user but still a way to have some control over the thread.

The user will also see a “View Hidden Tweets” section where all the tweets that you’ve hidden can be seen and you can unhide them when you feel like it. How they eventually roll this out and communicate the update will be crucial to the success or failure of this particular feature. It can backfire if not properly explained as people might see it as a way for users to censor those that they don’t agree with. But it also might be beneficial to those who understand how and when to use it.

Then again, this may not see the light of day as there are some things that they’ve previously tested that they eventually shelved. Let’s see how this works out and if it will actually work.

Twitter is testing replies moderation. It lets you to hide replies under your tweets, while providing an option to show the hidden replies pic.twitter.com/dE19w4TLtp