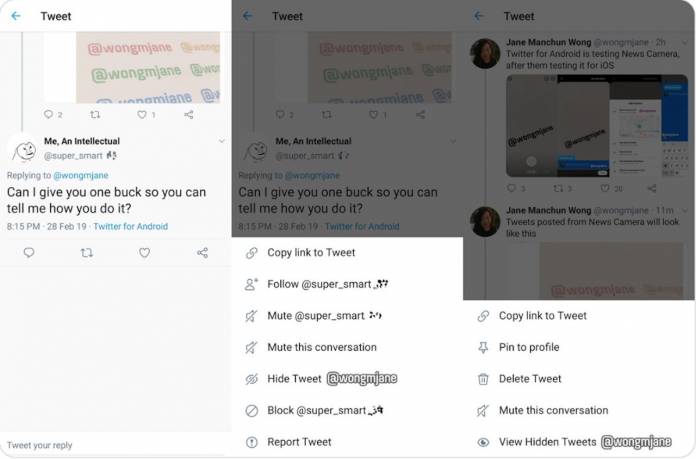 Twitter continues to experiment with ways to let users have more control over the conversation that they started but also to maintain the supposedly open nature of what goes on in the platform. A couple of months ago, a tipster revealed that the social network is actually testing a “hide reply” feature that is another alternative moderation tool for users without having to resort to more “drastic” measures. It seems that they will be rolling it out this summer already.

When we say more drastic, that means muting, blocking, and reporting those tweets or accounts that are bothersome and offensive to the conversation that you’re trying to have with other Twitter users. But for those replies that are either irrelevant to your original post or are annoying but still innocuous enough not to warrant any of the three moderation tools, Twitter will be offering a “Hide Reply” feature.

The original poster will be able to have more control over what is included in the conversation. Those viewing the thread will still see that you hid some replies but if they wish to do so, they can still see everything. But at least the one who started the tweet will be able to moderate what people initially see.

However, while this can be a tool to slightly curb abusive behavior on the platform, Twitter will need to have policies in place to avoid making this tool a source of censorship, especially if you don’t agree with what someone says to you. Also, hiding replies that don’t reflect your beliefs or that aren’t exactly agreeing with your opinion may result in an echo chamber, which we don’t always want to happen in social networks.

The “hide reply” feature will be introduced sometime this June. They did mention experimenting with other ways for users to better control the conversations, but we don’t know what other tools they’ll be introducing as well. They may roll out these things slowly so as to test the waters or just make it available for everyone. We’ll update you once we hear more.