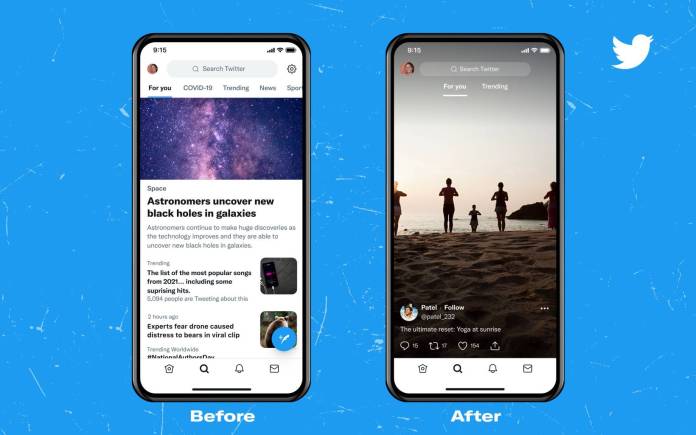 If you headed to your Twitter’s Explore page, you might have been confused and thought you accidentally switched to TikTok. That’s because Twitter is testing out a new look for that section of the app, displaying tweets now in full screen of the mobile app. The new Explore experience seems to be available in Android and iOS devices in select countries for select users who use the app in English. This is just another example of how TikTok has been able to influence a large part of the social media landscape.

Twitter posted a “checks Explore tab” tweet and showed screenshots of what the experimental explore page looks like. Previously, or currently, as you can see, the Explore tab shows tweets that it thinks you might like and those that are currently trending. But it only shows a cover photo of the topmost tweet and the rest of it are headlines or snippets of the tweet. It’s been good enough for most of us that do actually visit the page. But now it’s time for a change.

If it’s looking different, then you’re in our latest test: a new Explore experience to help you discover the best content that’s trending. Available in certain countries for some of you who use Twitter in English on Android and iOS. pic.twitter.com/PGQwMT8r8B

The new-look Explore features a full-screen tweet, showing the photos, videos, or links. If it’s just a text tweet, it’s still full screen with the text. There are also two tabs there: For You and Trending, which is also pretty much similar to TikTok’s explore page. You’ll have to swipe up and down to move between the tweets and videos seem to autoplay. The trending tab doesn’t seem to have the full-screen treatment based on some of those who posted screen recordings of the new tab.

TikTok has had a major influence on how social media apps have developed over the last couple of years, with giants like Facebook, Twitter, Instagram, Snapchat, and YouTube trying to capture the magic. They would either create their own similar features and user interface or actually almost completely imitate the thing that has worked for the Chinese-owned short-form video app. It’s unclear how much longer this will go on until we get a new social media darling.

The Twitter test of the new explore tab seems to be rolling out to random users. So if you’re one of the lucky few, test it out and see if this is a change you’ll welcome.