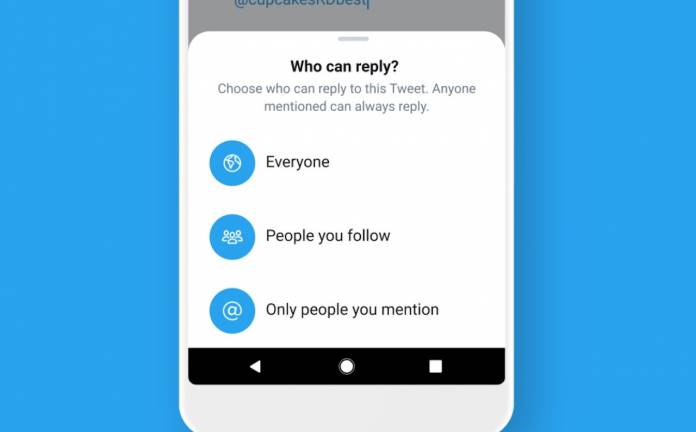 Sometimes you just want to start a public conversation on Twitter with your friends but suddenly other people chime in and the thread gets a bit out of control. While you could always just start a group chat or something, there’s still something to be said about discussing some things on the platform itself. Twitter is now testing out a new feature that will let you control who can reply to a particular tweet. People will still be able to read the tweets but their interaction will be limited.

If you’re one of the lucky few that is part of this test group, you’ll see something new before you post a tweet. On the left side of the screen, you’ll see an “Everyone can reply” tab. When you tap it, you’ll see a pop-up that says “Who can reply” and you’ll have three options. Everyone is the default one that you saw and is what the rest of the Twitter world has been experiencing since it launched. If you tap that, then that means, yes, everyone can reply.

The two new options are: People you follow and Only people you mention. Both are pretty self-explanatory and would be useful when you want to limit those who will be able to reply to a particular tweet. If you choose the latter two settings, the reply icon will be grayed out so they know if they cannot reply to that tweet. People will still be able to read the thread, retweet it, retweet it with comments, and like the tweet. They will just not be part of the conversation.

A new way to have a convo with exactly who you want. We’re starting with a small % globally, so keep your 👀 out to see it in action. pic.twitter.com/pV53mvjAVT

Some will view this new feature as another way that you will “silence” those with opposing views or those that you don’t want to listen to. Some will see it as a way to manage your stress and mental health when on Twitter, which we know can be toxic at times. Twitter says they are open to feedback and exploring this setting in a way that people will still be able to participate in public conversations and at the same time give people control over the conversations they start.

Only a limited group of people will be able to get these new conversation settings as they are still in the testing stage. If you’re one of those, try it out and see if there’s a difference in the way the conversations around your tweets flow.