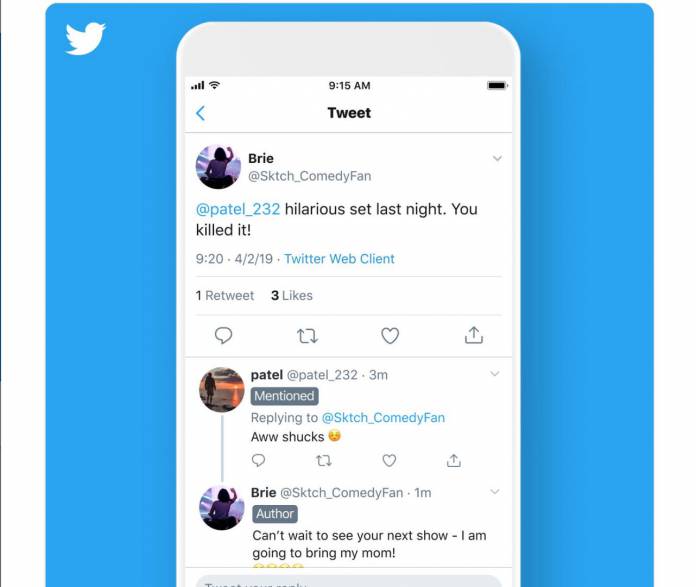 When a Twitter conversation among various users becomes longer and more complicated, it can sometimes be a bit confusing especially if there are a lot of people involved. The social media platform is now testing out a new way to label these conversations and let us know who is the author, mentioned, and following. This is an update to its original labeling system that they previously started testing, renaming the “original tweeter” to author. It is also similar to what they’re testing in their prototype app twttr.

A few weeks ago, Twitter started testing out a feature that would label a tweet from the “original tweeter”. This shows when the person is the first to tweet a post within a conversation thread. However, it seems that people were confused about what it means, expect those, of course, that know where this term came from which is “original poster” on message boards and online forums.

So now they have renamed “original tweeter” to “author” which they think may be more understandable to those who are not so tech savvy but are on Twitter. There are also now two new things that they have added to the conversation labels. “Mentioned” is added to any tweet posted by someone who was mentioned by the author. The “Following” label is added to those tweets from users you’re following.

Actually, these labels are pretty similar to what they’re also trying in the prototype app twttr which lets them experiment more with selected users and apart from the actual public platform. They’re using a color-coded line with the author having a grey line next to their tweet while those that you’re following have a bright blue line.

The prototype app is by invite-only so unless you’re part of that small network, then you won’t be able to check it out. As for the test they’re doing on the main app, they’re using a random sample of users so if you’re seeing it, let us know what you think and if it makes the conversations easier to follow.

We want it to be easy to follow and join conversations on Twitter. We’re testing out labels on replies: author, mentioned, and following. If you see them, let us know what you think! pic.twitter.com/L228sMbh75