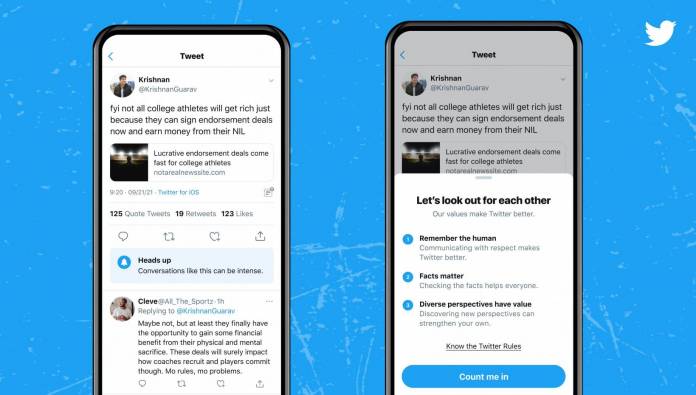 Twitter likes experimenting with features to a small group of users before deciding whether or not to roll it out to beta testing and eventually to the stable version. Not all make the cut but the past year or so we’ve seen a lot of new features come to the platform as well. A new thing that they’re testing out now is a warning label for conversations that can get too heated or intense. This way users will be able to decide for themselves whether or not to join the fray.

The Twitter support account posted about this new feature that is considered “a work in progress”. When there’s an ongoing conversation that you’re thinking about jumping in, you’ll see a light blue banner above the replies when it’s a topic that may be pretty heated or intense. It says “Heads up: Conversations like this can be intense.” Tapping on the banner will bring up a pop-up prompt with a few more details to help you decided whether or not to jump in.

Ever want to know the vibe of a conversation before you join in? We’re testing prompts on Android and iOS that give you a heads up if the convo you’re about to enter could get heated or intense.

This is a work in progress as we learn how to better support healthy conversation. pic.twitter.com/x6Nsn3HPu1

The prompt reminds the user of three things to help “look out for each other”. The first is to remember the human being behind the Twitter account that may be debating things with other humans on the thread. There is also a reminder to check the facts first before carrying on the conversation. And lastly, there’s a reminder that discovering new perspectives can actually help strengthen your own. There doesn’t seem to be information on why that particular thread became heated which may be important as well.

If you do decide to participate in the conversation after that “warning”, you can click the “Count Me In” button to proceed. There’s also a Know the Twitter Rules link that you can click on in case you need a refresher. This warning label will be useful for those who need to watch out for their mental health and avoid conversations that may trigger their anxiety or other extreme emotions. Of course, the decision to join the thread will still be up to the person but at least they’ve been warned.

This prompt should be available to select users on both iOS and Android, although they did not indicate what percentage of users are part of this test. Let’s see if it eventually makes it to the platform and if there will be any changes to the final product.