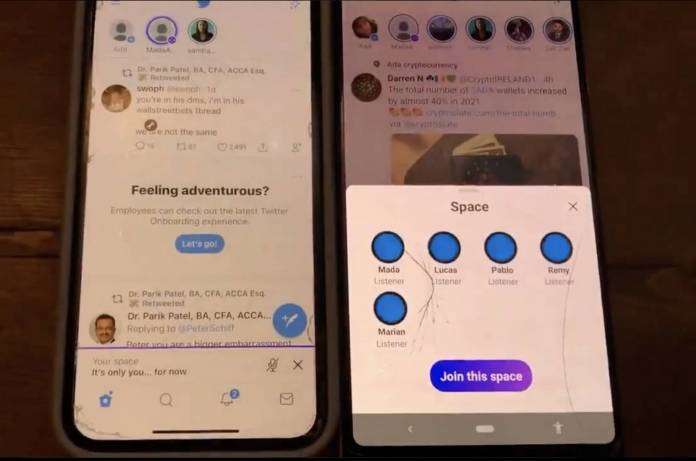 Lest you think that Twitter has no plans of bringing their Spaces feature to Android anytime soon, they have now posted what it will most likely look like when it rolls out. Spaces is still in the testing stage but iOS users can join a private room when invited but Android users have no way of doing so. Twitter told the “Android gang” that they have not forgotten them and then demonstrated how Spaces will function on a Pixel device.

The official Spaces Twitter account posted a video a 24-second video showing how it would work on a Pixel device. Basically, you will create a Space and choose which users you want to join you in the private room. You then choose whether you will just be a Listener or a Speaker and then join the room. They didn’t really show how the room would work with all the audio and listeners but we get the basic idea of how to create one.

Android gang…we haven't forgotten about you

Spaces was announced by Twitter late 2020 and is basically an audio chatroom within the app. Early testing shows there seems to be no limit to how many people can join but most of them will remain listeners when invited into a room. The one hosting the Space will have control over who will speak and interact with the host. It’s seen as another way for celebrities, personalities, and other creative types to engage with their followers.

Twitter seems to be serious about building on this feature as they have recently acquired podcasting app Breaker to get the expertise of their founders and team in working within the audio space. While the app itself will continue as it is, the tech people will be working with Twitter towards building Spaces. In what capacity though is still unsure as of this time. So this also means the testing phase for the feature is far from over.

It will probably be some time before we hear anything solid about Twitter Spaces. Of course we’ll bring you major developments as it happens. And Android users are assured that the team is working on including them soon.