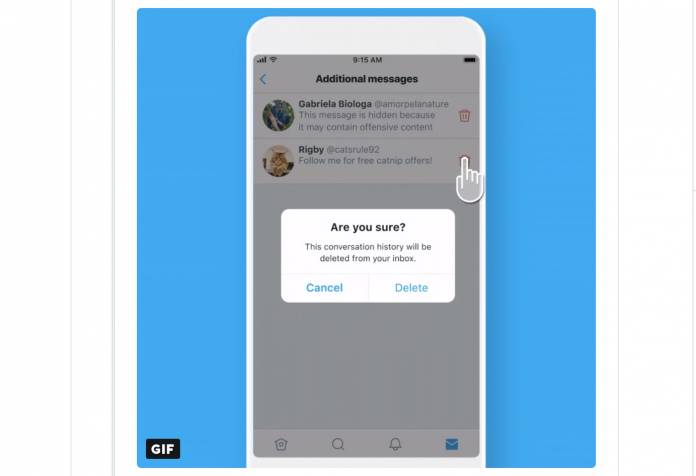 A couple of months ago, Twitter started testing out a feature that would filter out Direct Messages that are deemed offensive as well as unsolicited and unwanted. The social media network is rife with things like this which has led to criticism that Twitter is an unsafe place. It looks like the test went well and the feature has been deemed useful as they are now rolling it out to all users and on all the various platforms including Android devices.

Think of the DM filters as a sort of email spam filter for your Twitter inbox. If a message has been flagged as potentially spam or offensive, it will be tagged and filtered into a separate inbox. You won’t be able to see them immediately as they will be hidden in the message requests section of your inbox. If you want to see them or delete them, you’ll have to tap on the “show additional messages including those that may have offensive content” and you’ll see all of those that have been flagged.

You can directly delete them without having to open them but if you have a morbid sense of curiosity, you can still tap on the said messages and view them at your own risk. But the idea behind this feature is of course to protect you from spam and unsolicited offensive pictures or messages so best to just delete them directly without looking at what horrible thing some people might have sent you.

While Twitter has been a great place to exchange ideas and opinions, it has also become pretty toxic at times and abusive content is commonplace. Twitter has been continuously criticised for not providing enough tools to protect its users from such content. But they have been bringing new tools like reporting features for problematic tweets, muting users that contribute to the toxicity or just blocking them altogether.

The DM filters is now available for all Twitter users on their Android smartphones and web platforms. Hopefully, this will lessen the stress on those that keep getting all those horrible DMs as well as being flooded with spam messages.