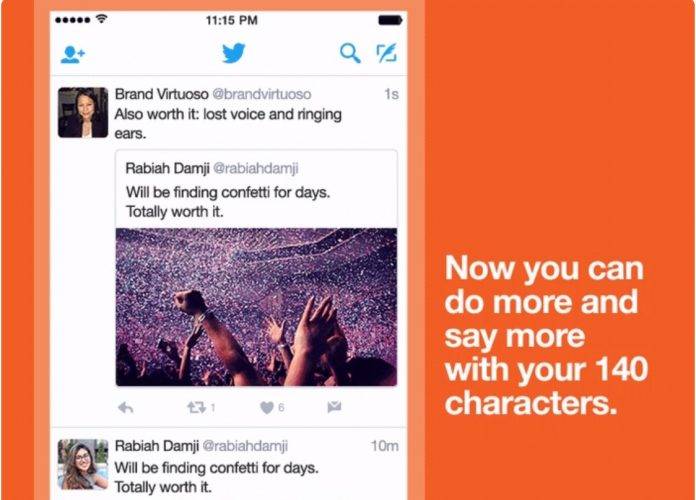 The day has finally come! No, Twitter still will not let you post 10,000 character tweets of course. But what they have done is what we have been hearing all along: relaxing the 140-charater limit by not including multi-media items in the count. We’ve been hearing rumors about this for a while, but the micro-blogging social network has finally made it official, or at least some of it. The latest update brings new rules as to what is included in the character rule, and it should give users more room to express themselves.

Starting today, the photos, videos, animated GIFs, and polls that you include in your tweet will not be counted as characters anymore. If you’re retweeting something, the quoted tweet will also not be included in the 140-character limit. Some users are also reporting that Twitter is experimenting with not including handles or usernames in the count as well, although that is not official.

Previously, there were also reports that external links will also not be counted, although they are already automatically shortened by default. But it seems like that isn’t included in the rollout of this update. But all in all, these changes give users more freedom in expressing themselves, their opinions, or their valid concerns.

Now whether this will bring in new users, or encourage already existing ones to become active again, that is still the question and may be too early to tell. But this move is definitely consistent with Twitter’s desire to add growth to the network, after years of stagnation. They wouldn’t go so far as actually removing the limit, since CEO Jack Dorsey believes the “beautiful constraint” brings about “creativity and brevity”.