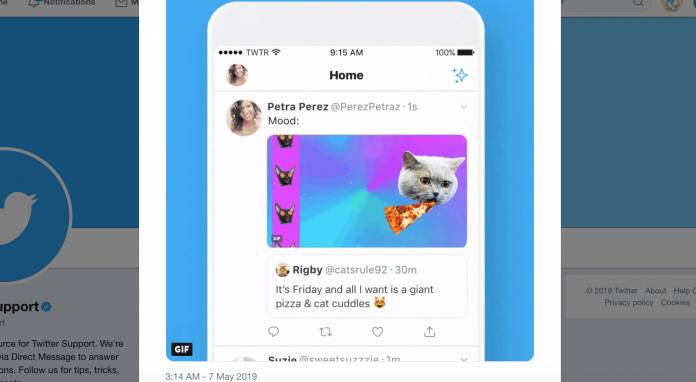 That most requested feature on Twitter is finally here! No, sorry, it’s still not the edit your tweet button. But according to Twitter, one of the things that users have been requesting is to add more options for content when retweeting something. So finally, you can now retweet with photos, videos, and GIFs. While users seem genuinely excited about this update, there are still those who are still waiting for the edit feature with bated breath (don’t hold your breath on this one though).

While this may not be a pretty major update, it’s still interesting especially if you retweet and react to a lot of people on Twitter. This is also pretty useful for those who don’t like to use words to express themselves when reacting and reposting a tweet. It may also be a simple feature to add but the folks over on Twitter tried to explain that it’s pretty hard to design in a way that it won’t be too cluttered and overwhelming when you look at your timeline.

There is a whole thread explaining this technically but the short and simplified version is that they were able to put the original tweet in an indented box that’s smaller than your retweet. So that makes your RT with either the photo, video, or GIF capture the full width allowed on your screen.

How you use it is also pretty simple. Tap the “retweet with comment” option on the tweet that you want to repost. Then you can choose the image or GIF icon on the toolbar and then upload or choose the photo, video or GIF that is most appropriate to your reaction. Then when you’re done, tap the Retweet button and let the Twitter magic begin (hopefully with no one getting offended or something).

It's easy to express yourself by Retweeting with a comment. What if you could take it a step further and include media? Starting today, you can! Retweet with photos, a GIF, or a video to really make your reaction pop. Available on iOS, Android, and https://t.co/AzMLIfU3jB. pic.twitter.com/Oir5Hpkb2F

As for the real most requested feature, the edit button, Twitter execs barely react every time they’re asked about this. So probably don’t expect it anytime soon. The retweet with media feature is now available on mobile and soon on desktop.