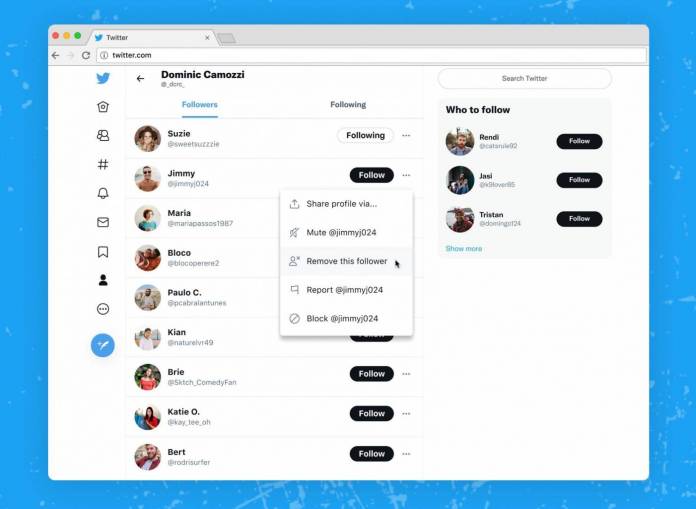 There are times when you just want to remove a specific account from your list of followers. If you’re using a public account or you’re a public figure, you can’t control who follows you unless you block them. But for situations when you simply want to remove them without blocking them, Twitter is now finally rolling out this feature that they have been testing since last month. It makes the process of removing users from your followers list hassle-free. It’s only available for desktop though and no news yet when it will roll out to mobile.

Previously, if you wanted to remove a follower, you will have to block them so they will not have access to your account and your tweets. However, the person will know that you blocked them when they try to go to your account and it might cause some friction. They can screenshot the fact they are blocked and use this as a weapon against you. There is a “soft block” process as well where you can quickly block them and then unblock them immediately.

But this new manner of removing a follower may be less painful. To remove someone, go to your profile, click Followers, and then go through your followers list and look for the person or the people you want to remove. Tap on the three dots and choose the “Remove this follower”. There’s a prompt to make sure you really want to remove them. It explains that they will not receive a notification that they have been removed and they can still follow you again in the future when they figure out they’re not following you.

rolling out to everyone on the web today👇 https://t.co/Nqhhf2q2fo

This is of course not a perfect system but if you want to avoid blocking people and just remove them, then this is the best way so far. But if you want someone to never have access to you and your content again, then blocking should be the best option. This feature will be useful for influencers, creators, and other public personalities who may have a couple or more unwanted followers. Even ordinary users will benefit from this if soft blocking or outright blocking doesn’t work for them.

For now though, this is only available for Twitter on desktop. They have not said yet when it will roll out to the mobile app but of course, eventually, it will come there as well.