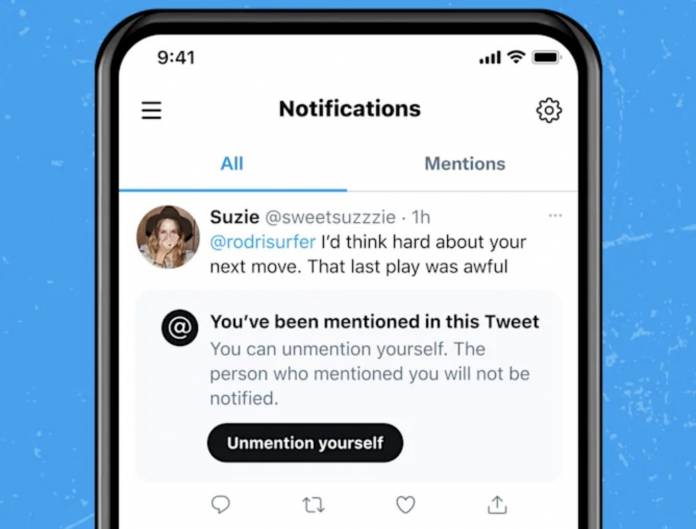 At one time or another, you probably experienced getting tagged on Twitter in threads that you have no intention of being a part of. It may have even come to the point of online harassment and bullying already. Currently, your only recourse would be to block the person or people tagging you but it looks like Twitter may be working on another option to help you remove yourself from the conversation. We may soon have an “unmention” tool so you can remove yourself from tweets that have tagged you for one reason or another.

Engadget shares some of the early concepts of this feature from a Twitter product designer. The main idea is to help users untag themselves from tweets and also have more control over those who can tag them or not in future tweets. It is a bit similar to the feature that limits replies to your tweets with several options to choose from. The difference is that the former can apply to those tweets already published while the latter has to be set up before you tweet something out.

The “unmention” tool will let you unlink your handle from specific tweets that have tagged you so you won’t be tagged anymore in future replies on that specific thread. You will also be able to block some users from mentioning your handle in the future without having to necessarily block them. You will also be able to block new mentions for a specific number of days. This is for those who may have been involved in something viral so you can wait until things kind of calm down.

There’s also the possibility that it will be able to notify you when you start getting a lot of mentions. Some people tweet something out and then don’t check Twitter for hours or days without knowing that it’s gone viral. At least here, when you get the notification that your tweet is blowing up, you can change your settings so you can address the situation that may have escalated. Going viral isn’t always the best thing as it can sometimes lead to harassment.

Of course we don’t know yet if this feature will make it to the final build but it would be petty great to have something like this. Let’s wait for further announcements from Twitter regarding this possible feature.