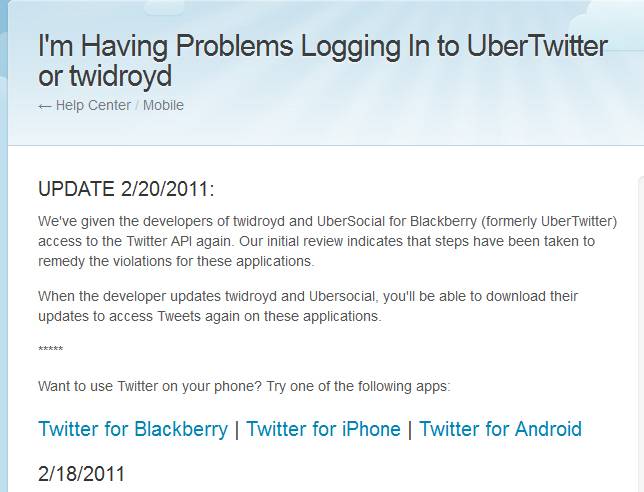 Third party Twitter client users can rejoice. Twitter’s Help Center is reporting that TwiDroyd and Uber Social for Blackberry (aka UberTwitter) are now back in business. Having made sufficient changes to the way they handle user Twitter feeds in order to correct the policy violations that grounded a handful of Uber Twiter clients last Friday, UberMedia’s Twitter Clients now have access to the core Twitter API and can start giving access to Twitter feeds immediately. As we reported last Friday, both UberMedia (with Twitter clients including UberTwitter, Echofon, and others) and TwiDroyd, were suspended for policy violations pertaining to using Twitter feeds to maximize monetary gain.

Twitter has a simple set of rules pertaining to such activity that’s designed to protect user privacy. When the clients violated tehse rules, action was taken. Both platforms worked quickly to correct the violations and now Twitter has granted them access once again. Users may have to wait until Ubersocial and TwiDroyd update their apps in order to access it, but that should happen in short order, if it hasn’t happened already.