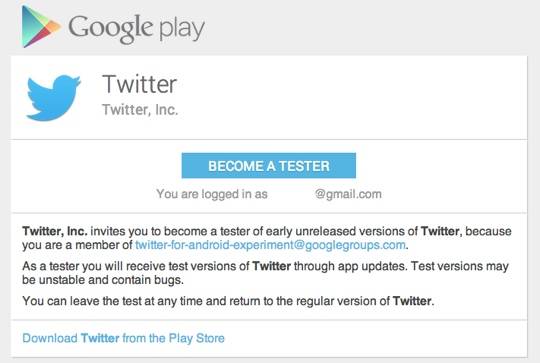 Twitter for Android joined the group of apps that had a beta test program back in late-August. The beta program is handled through the Play Store and available for those who want early access to new features. Not to mention, those who are willing to provide feedback and possibly put up with some quirks and issues.

Well, it looks like the folks at Twitter have taken things even earlier with the introduction of an alpha test program. The alpha test group was discovered by TechCrunch who found details of the program in a Google Groups posting. Said posting mentions the “Twitter for Android Alpha Program” which is said to have been born as a result of user feedback.

Details here point towards how users may have issues and that space in the program is limited. The folks at Twitter are opening this up for current members of the Android Experiment Program and it appears they have already begun sending out invitations by email. It was also described as being a first come first serve type of invitation.

Or in other words, it does’t appear as if you will be able to sign up as you can for the Twitter beta test program. Otherwise, and perhaps key here, this alpha test group will be getting “earlier iterations of experiments.” This group will also be more active with feedback.

Further details from the Google Groups posting mention how being a member of this group will give users an “opportunity to provide direct feedback and collaborate with us [Twitter] via a forum.” That all being said, the beta test program seemed like a good way to get an early look at new features, we just have to wonder how many are willing to trade stability for an even earlier look at those features.