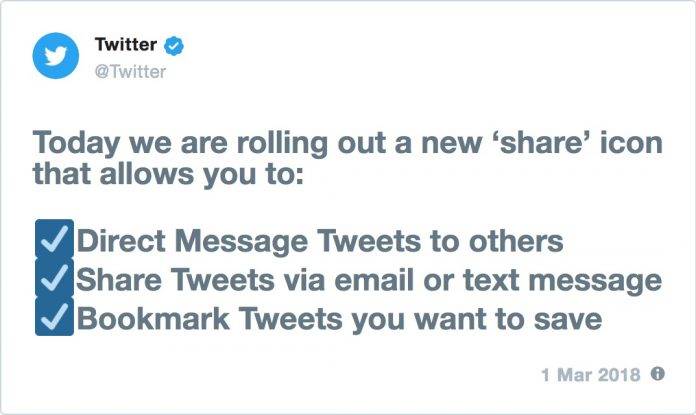 While it’s easy to “heart” and to repost stuff on Twitter, sometimes you need to be able to save tweets for later reading or later reposting or share it to other social networks and messaging apps. The native mobile app is not very robust when it comes to those things, that’s why we all probably use a third-party client. The good news is they’re now catching up and the latest update to the app adds a new feature called bookmark (which does as the name says) and a share icon to make sharing better as well.

You could always “heart” a tweet to save it in a sort of list and go back to them later on, but it gets mixed in with tweets that you actually want to heart. And also, people get notified when someone hearts their tweets. So this new Bookmark feature will come in handy for those that you actually want to get back to later on, whether it’s to read, retweet later on, or just bookmark for posterity. The tweets you’ve bookmarked can be found in the Bookmarks section under your profile icon. Also, only you can see what you’ve put there, so no embarrassing moments for you.

The share icon is also a new addition to your Twitter timeline. When you tap it, you’ll see three options: Send via Direct Message (finally!), Add tweet to Bookmarks (as explained earlier), and a Share Tweet via option which will bring you to your device’s share menu, including email, Pocket, to-do list, and other apps you have installed on your smartphone.

The new features have started rolling out globally to the Twitter app on Android devices, Twitter Lite, and mobile.twitter.com on your browser. So now you can start bookmarking things you will probably not be able to get back to later on (much like Facebook’s Saved links and your Pocket app).