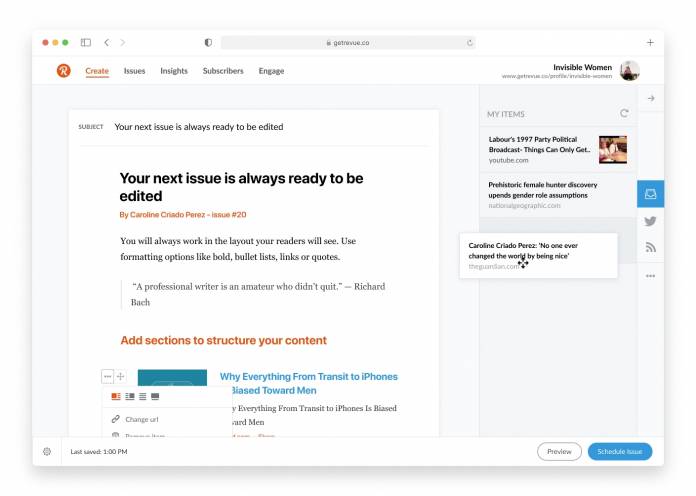 To say that there are a lot of writers on Twitter may be an understatement. Whether it’s to build a following, connect with other writers, practice writing, or just vent and use the platform as a cathartic release, Twitter has been an important tool for writers and now they are taking steps to help it become an even better place for writers and aspiring writers. The first step for this is now in place as they have acquired Revue, a startup that lets users publish and monetize newsletters.

Their acquisition of Revue will let Twitter give space for writers and publishers who already have a huge Twitter following. There are no exact details yet how they will be able to do this but some ideas that they threw around in the blog post is letting people sign up for newsletters from Twitter or a new feature that will let writers have conversations with their subscribers. Of course all of this will be done within Twitter we assume and it should be done seamlessly.

The “monetization” and “revenue” word is being thrown around as well as Twitter says they are looking at a “durable incentive model” that will help writers earn money through paid newsletters. They are committing to develop “audience-based monetization” but how this will look like is still unclear for now. With a lot of free content out there, getting people to pay for a newsletter is something that may have to be further studied.

For now, what Twitter is doing is to make the Pro features of Revue free for all accounts and they are also lowering the paid newsletter fee to 5%. Revue will also remain a standalone service and they’re even expanding their team by hiring more people. In the future, they will be creating more “discovery, reading, and conversational experiences” on its own platform and integrating it to Twitter as the long-form content partner.

Twitter did not disclose how much the acquisition cost them. We can expect more news from Twitter probably as they say this is just the first step in creating a better space for writers and creators as well.