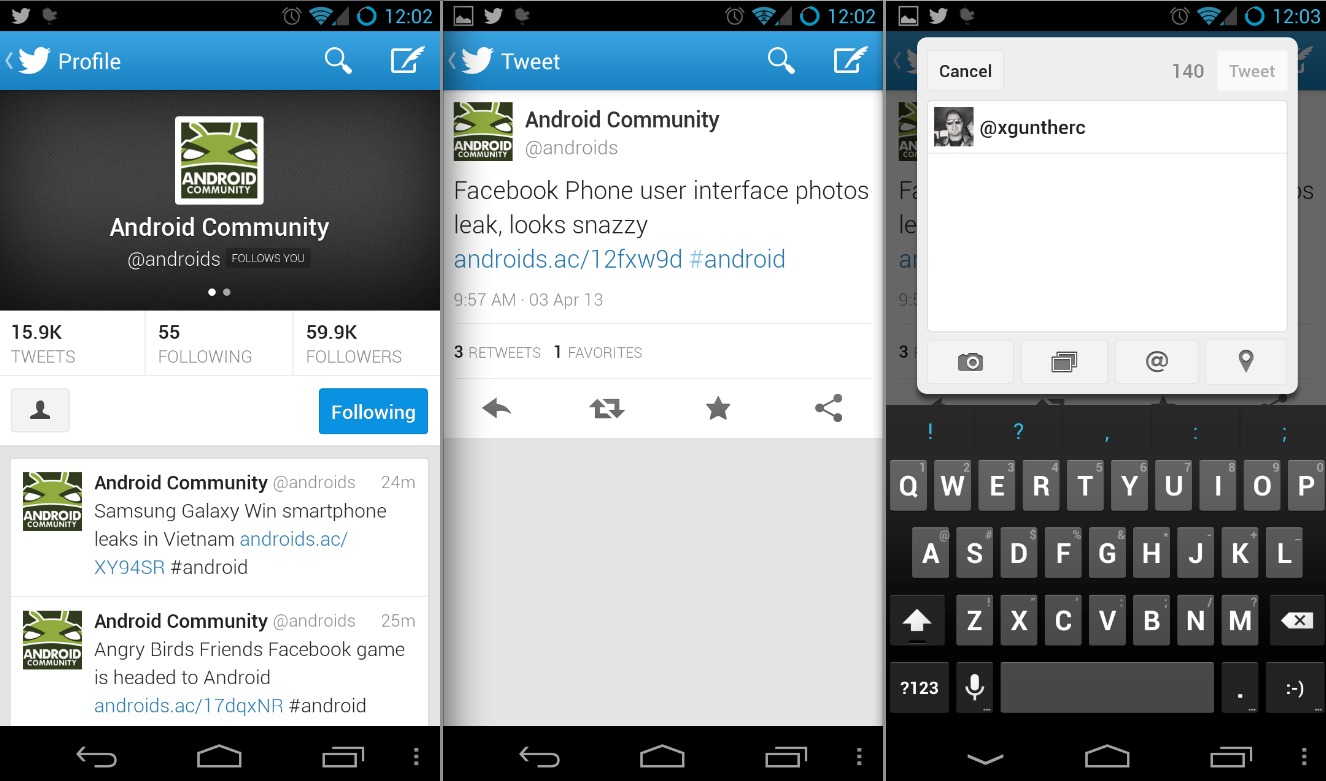 Today Twitter for Android has just received a pretty major update to version 4.0 that brings a brand new look and feel to the social app. The update gives Twitter a UI makeover, adds a few new features, and is said to bring with it a “native Android experience” according to the developers. Twitter just confirmed the details on their official blog.

So what can you expect from the new Twitter? A pretty decent experience from our very limited time with it. Honestly it has a slight TweetDeck feel to it, something that I’m happy to see, and overall the changes are quite welcome. Their blog states Twitter 4.0 brings the app design up to speed and the design is crafted around Android 4.0 and above.

As you can see from the images above the new UI is pretty simple, seamless, and looks quite nice. Things are extremely speedy too. According to the details Twitter states the UI “reflects a native Android experience: wider and taller timelines that fill the screen, a flat navigation bar, tap and hold for quick actions, and more.” Here’s the changelog:

– We’ve got a brand new look and feel crafted for Android 4.0+. Navigate seamlessly between your favorite parts of Twitter with a simple swipe.
– It’s easier to connect with friends and join conversations with @username and #hashtag suggestions that appear as you search or compose a Tweet
– Discover, install and launch your favorite apps from Tweets
– Other bug fixes and improvements

Overall the new UI seems nice and polished, but we have had the occasion lag while scrolling, but not much. This is how you make a mobile app Facebook! Twitter 4.0 allows simple swipes between tabs for navigation, and you’ll now get suggestions and predictions while typing based on hashtags and usernames. Is it just us or does the settings button not seem to work though?

One interesting bit there is the ability to discover, install, and even launch your favorite Android apps from Tweets. This seems neat and we can’t wait to try it out. When someone shares content from another mobile app like Foursquare there will now be a link on the bottom left of said content to instantly open the app from Twitter. That feature is reportedly rolling out to users over the next few days. Get the new Twitter from the Play Store now and give it a try.