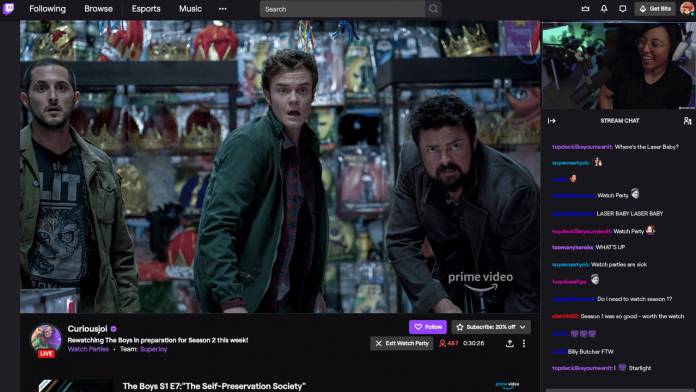 COVID-19 pandemic has enforced socially distant behavior in recent times and that’s made virtual watch parties popular in the last year or so. Such watch parties have become quite popular on Twitch too as different genres of streamers are hosting them for the fans on the platform. Watch Parties feature on Twitch launched last year, giving streamers the option to host movies and TV shows available on Amazon Prime, and now there’s more good news.

Before today Watch Parties could only be accessed on mobile devices via the web client, but now it has changed. In an official announcement, Twitch tweeted the availability of the feature on Android and iOS devices.

In fact, other platforms such as Disney Plus, Hulu or even Amazon have their own virtual watch parties feature. Even though Amazon is still to roll out the feature on its own Prime Video app for mobile users, the Twitch release points to the popularity of this trending socializing time pass.

Even Apple is serious about the watch parties as the upcoming iOS 15 update is going to add SharePlay which brings content to FaceTime for supported apps. This expansion means, Twitch will be able to reach out to more users worldwide which all goes well for them.

To access the Twitch streamers party content users will need to have an Amazon Prime subscription. There are some restrictions though – like the regional restrictions which fully apply to streaming Watch Parties if the content is not allowed in your current location.

On the other end of the spectrum, you don’t need to be a Twitch affiliate or partner to start a watch party that keeps all the ends open without any strings attached. Overall, the feature will please users who are already seeking watch party content on various services.